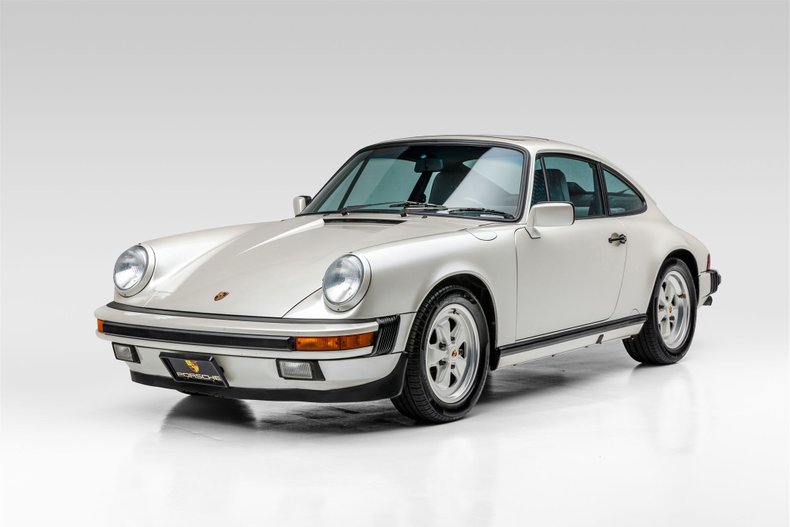 The first owner took delivery on Christmas Eve in 1986 and kept the 911 until September 1993 when he sold It with 68,000 original miles. The second owner, also a Utah resident, kept the car until July 2020 when it was sold to European Collectibles. In preparation of the sale, this 911 received a mechanical service that included an oil change, new engine belts, a new clutch and a complete overhaul of the fuel system. The work was performed by Concourse Auto Werks when the odometer read 77,366 miles and cost a total of $6,822.46. New Pirelli P7 Cinturatos were installed around the same time period and still look brand new. With all services up to date, the car runs very well and the G50 transmission is super smooth thanks (in part) to the new clutch. The body is in very good shape and without any notable scratches or dents. The Pearl White Metallic paint is beautiful from all angles and depending on the amount of sun, can vary from a matte look to a bright one. The factory glass wears the original decals and is in great shape. The Silver-Grey interior pieces are nicely complemented by black carpets and a black dash. The leather on the sports seats is original and showing very little wear. Complete with Carfax report, original window sticker, tire compressor kit, toolkit, spare tire, second set of keys, owner's manual, dealer supplements, and original maintenance booklet. Thanks to the mild Utah weather, and a lifetime of garage storage, there isn't any warping or fading to the dash or rear shelf. The 1987 – 1989 “G50” 911s are great driving cars and as a result so many of them have accrued hundreds of thousands of miles. This 911 Coupe with it's rare “Paint to Sample” color and relatively low miles is an exciting opportunity for a Porsche enthusiast.

When all was said and done the model 911 3.2 Carrera did not disappoint. It not only lived up to the standards set by the model 911SC that it replaced, it exceeded all expectations. Now a much sought-after classic car for Porsche enthusiasts, the model 911 3.2 Carrera was the last version of the original 911 series. The model 911's produced after 1989 all came with completely new exterior styling as well as new brake, suspension, and electronic technology. You could say the 3.2 Carrera was a grand finale of sorts, but it was certainly not the end of the road for the 911.