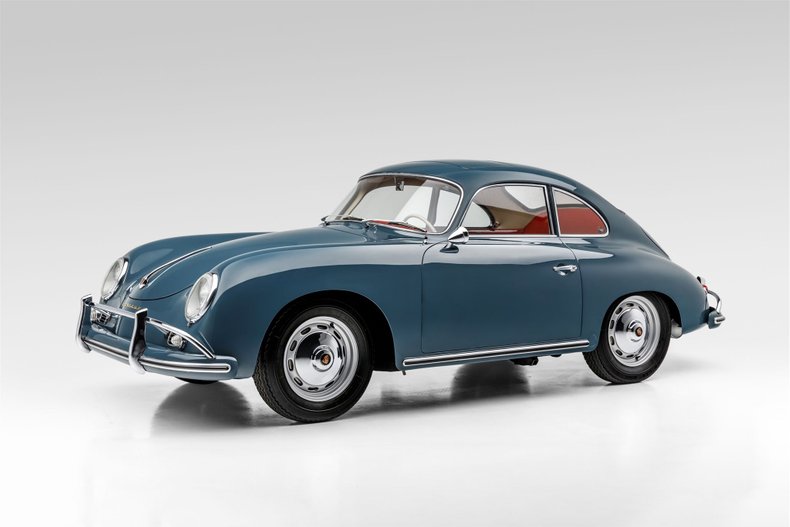 The 356 was lovingly maintained by each owner and was eventually painted a dark red metallic. Mr. Neilsen was an avid Porsche collector and was well-known among 356 owners. During his ownership, he drove the car almost daily. The only option the 356 lacked that Mr. Neilson desired was a Goldie sunroof. At great expense, he sourced an OEM factory 356A sunroof clip and had it professionally installed. In 2010, he began a restoration. Rather than send it elsewhere for work he was capable of doing, he undertook the task at home and relied on the help of specialists when necessary. It was a fairly straightforward restoration since the body, underside and inner structures were in good shape overall. The metallic burgundy paint it had worn for years was stripped, and the body was sanded and prepared for the Aquamarine Blau paintwork. The paintwork was done quite well and looks more recent than it actually is, however where this 356 really shines is in the trim department. There isn't a reproduction part on the exterior of this car including the glass, rubber, bumperette, and shine up license plate light with all of the original parts being in fantastic condition.

Upon arrival at European Collectibles, the floor pans, undercarriage, and suspension were stripped to steel, everything was in great original condition, then a concours-correct undercoating was applied, and all of the suspension was painted. Next, the body panels were inspected and confirmed to be matching to the car. The date codes on the fuel tank, sending unit, seat hinges, and all five wheels are correct for the build date of the car. The interior was showing some age, so the decision was made to have a new interior installed. The seats, door panels, and dash top were covered in the correct shade of red with German oatmeal square weave carpets and black rubber mats were installed. The headliner and sun visors were in good shape, so they were left as they were. All mechanical systems were checked and every light and switch was found to be operational. Additional options include a secondhand clock, AM Blaupunkt radio, and a Hirschmann Red Tip antenna. On the road, it performs very well and the matching “SUPER” (75HP) engine is noticeably more powerful with 25% more horsepower than the “Normal” 1600cc engines with a mere 60HP. The matching 716 4-speed manual transmission shifts smoothly, and the four-wheel drum brakes stop the car straight. This is the last year of the 356A Coupes and they are truly the best to drive. One of the most desirable 356s and they are indeed getting very difficult to find!