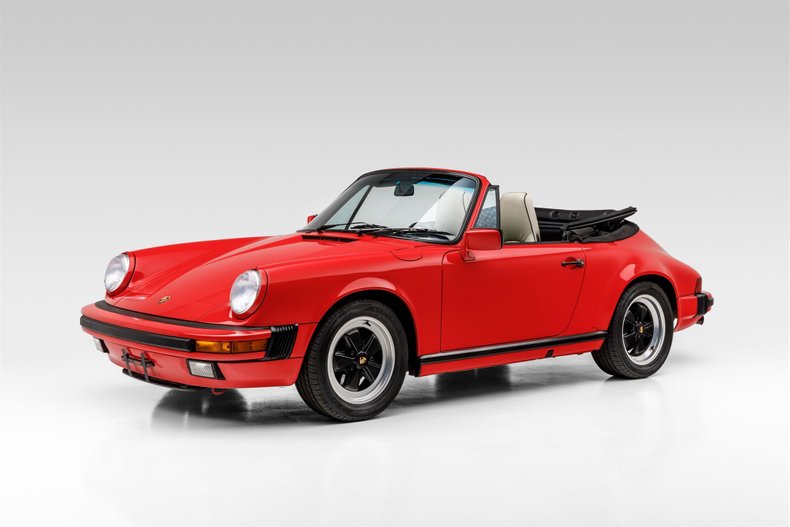 This 911 is one of the lower mile 3.2-liters that you will find with only 39,966 miles since new. The 3.2-liter engines are one of the best 911s that Porsche built! This Carrera is sporting original paint with the exception of paintwork on the front hood and has had a complete paint correction with ceramic coating. The paintwork is nearly flawless! All body VIN stickers are still in place, a clear sign that it has never been in an accident with a clean Carfax. A true PCA Preservation Class candidate, which looks stunning & drives like new even though it is 32-years old! The interior shows almost no wear and is in amazing original condition. Finished in classic Guards Red with a Black and Linen interior.

This 911 is a very well documented Carrera over the past few years with an engine out service after a number of years in storage. 1987 to 1989 was the best of the series for the 3.2-liter Carrera's. Impossible to replace, do not miss this amazing example of Porsche 911 history!

Porsche built the “Carrera” 3.2-liter version of the 911 from 1984 through 1989. The 911 offered is a 1988. The last of the 911 with a true connection to the car Porsche introduced in 1963. It retains many of the original features of the 911 introduced in 1963 but refined to work well into the future. These were the most refined, well-tuned, and drivable of the original 911 series cars and had proper ventilation as well as modern features to make it a great grand touring car.