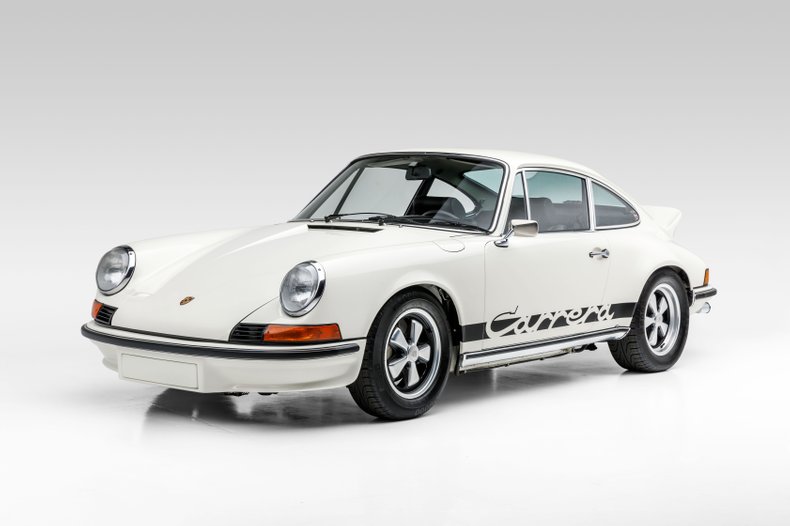 European Collectibles performed a ground-up restoration down to the tub over a 24-month period from 2013 to 2015. Every aspect of the vehicle was addressed with no expense spared. The entire tub was stripped down to the bare metal. All panels, front fenders, and bumpers were pre-fit to ensure the absolute best result. The entire body and undercarriage was painted with Glasurit Light Ivory (paint code 131) to original factory specification. The interior has been completely re-upholstered in “Touring” trim. The complete driveline was rebuilt, and everything was addressed including engine, fuel injection pump, transmission with the special RS oil pump, clutch, brake system, tires, suspension, and wire harness; all being rebuilt within the last 3,932 Kilometers. Both the engine and gearbox are matching.

A motorsport icon, the Carrera RS is considered by many to be the greatest 911 of all time. Following a complete restoration to original specifications, this example surely will not disappoint. Chassis number 0266 is one of the first 500 RS's built and this example was ordered to M-472 Touring specification. This RS is ready for both immediate road and concours use. Complete with tools, books and documentation of the restoration, this is truly one of the best 911RS's you will find with no issues.

One of the most desirable Porsches ever produced, the 1973 911 Carrera RS was built to allow Porsche to continue its success in motorsport following the retirement of the 917. The goal was to prepare an all-out campaign in the new European Grand Touring Championship Group 5 with a 911-based model called the RSR. To meet the FIA's production with amazing speed; 0-60 mph in 5.0 seconds.