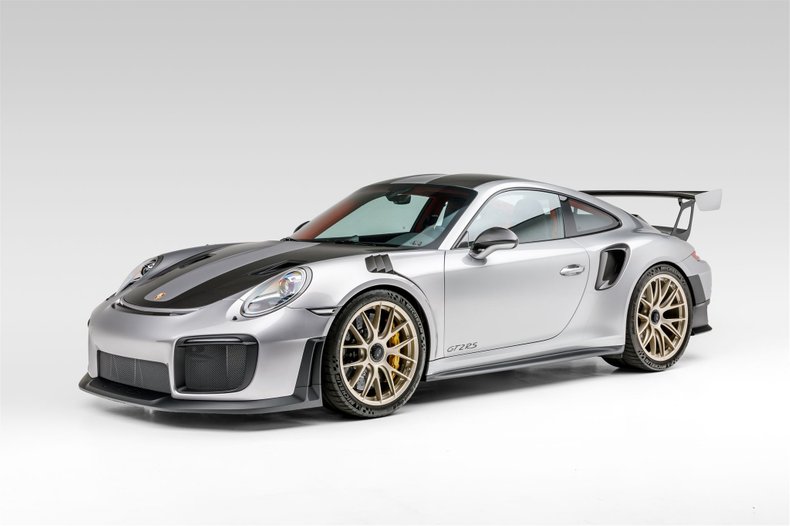 This beautiful Porsche GT2 RS was ordered with the VIP program through McKenna Porsche in Norwalk, California. The original owner opted for GT Silver Metallic with the Standard Interior in Black and Black/Red Alcantara. The GT Silver Metallic paint added $4,220 to the base price of $293,200. Additional options include Extended Range Fuel Tank of 23.7 Gallon ($140), 20/21” 911 GT2 RS Magnesium Wheels ($13,000), Front-axle lift system ($3,490), Luggage net passenger footwell, Weissach Package ($18,000), Floor mats, BOSE surround sound system, Window triangle trim in carbon fiber, Adaptive Sport Seats Plus with 18-way power adjustment, Voice control, Chrono Package with preparation for lap trigger ($550), and door sill guards in carbon fiber Illuminated ($530). One of the first to arrive in the United States via air freight, it was prepared for retail sale; the MSRP was a whopping $336,510

Complete with all books, window sticker, and keys. It is in as-new condition and has been stored inside in Southern California alongside a very impressive collection of cars. It is being offered below MSRP with only 936 miles.

The high-performance GT2 version made a return to the 991 lineage but now as an RS variant only with no standard variant being produced, unlike the previous generations. It was initially unveiled at the 2017 E3 along with the announcement of the Forza Motorsport 7 video game. The car was officially launched by Porsche at the 2017 Goodwood Festival of Speed along with the introduction of the 911 Turbo S Exclusive Series. The 991 GT2 RS is powered by a 3.8 L twin-turbocharged flat-6 engine that produces a maximum power of 700 PS (515 kW; 690 hp) at 7,000 rpm and 750 Nm (550 lb-ft) of torque, making it the most powerful 911 ever built. Unlike the previous GT2 versions, this car is fitted with a 7-speed PDK transmission to handle the excessive torque produced from the engine. Porsche claims that this car will accelerate from 0 to 60 mph (97 km/h) in 2.7 seconds, and has a top speed of 340 km/h (210 mph).

The car has a roof made of magnesium, front lid, front and rear spoilers and boot lid made of carbon, front and rear apron made of lightweight polyurethane, rear and side windows made of polycarbonate, and features a titanium exhaust system. Porsche claims that the car will have a wet weight of 1,470 kg (3,241 lb).

A Weissach package option is available, which reduces the weight by 30 kg (66 lb), through the use of additional carbon-fiber and titanium parts. These include the roof, the anti-roll bars, and the coupling rods on both axles made out of carbon-fiber while the package also includes a set of light-weight magnesium wheels.