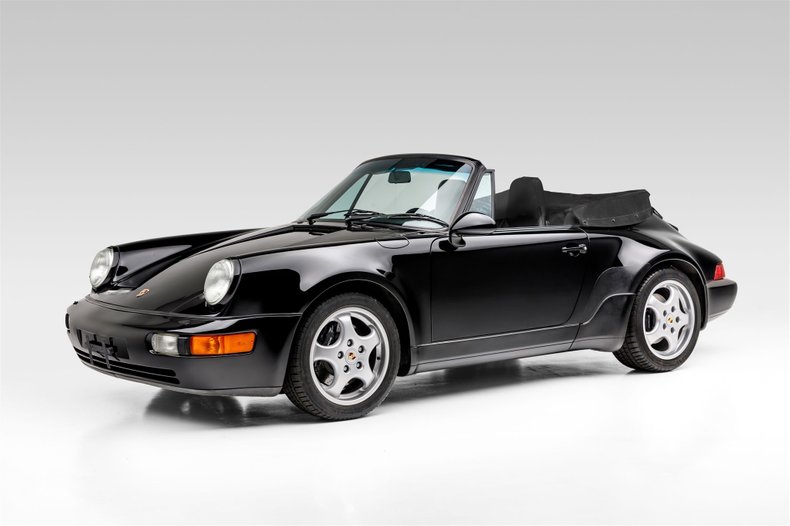 This is one of just 250 examples of the Roadster executed exclusively for the US market from 1992-1993. The America Roadster was the only true Turbo Look 964 produced for the United States and one of the most unique and rare Porsche 911 models ever. This particular example is finished in Black over Black with a 3.6-liter air/oil-cooled engine, horizontally opposed, dry-sump lubrication, produces 247 hp (SAE net)/250 PS (DIN) at 6,100 rpm with 228 lb·ft of torque at 4,800 rpm, a 5-speed manual transmission, rear-wheel drive, ABS brakes, and alloy wheels.

The suspension was redesigned using coil springs instead of torsion bars; the first major engineering changes since the original 911. The front suspension used MacPherson struts, a system that has continued for all subsequent versions, but the rear suspension retained semi-trailing arms.

A turbo-bodied cabriolet version was released in 1992. This had the standard electric spoiler and turbo guards. Mechanically, it was the same as the standard naturally aspirated 964 Carrera 3.6-liter flat-six engine. The convertible features the Turbo model widebody, with a whale tail delete. To fill out the widened track and bubbled fender arches, the America Roadster received the 964 Turbo model disc brakes, suspension, and special 17-inch Porsche Cup five-spoke wheels. Only 250 of this variant were produced in 1992; 326 in total during the 1992 and 1993 model years.

The America Roadster based on the 964 cabriolet represents the 40th anniversary of its 356 patriarchs from 1952. Dressed in its wide-body with upgrades to suspension and brakes, minus the Turbo tail. Recalling where racing began for Porsche, the 964 America Roadster results in a stylish 911 for active drivers confident in the direct feedback of the car, almost as if the Porsche is an extension of the driver's will.

Fast forward 40 years to 1992 with the widely popular and undeniably usable 964 Porsche 911, the perfect template to celebrate the America Roadster name. In similar fashion to the original, the production run was very limited – just 250 vehicles making the 964 America Roadster extremely rare.