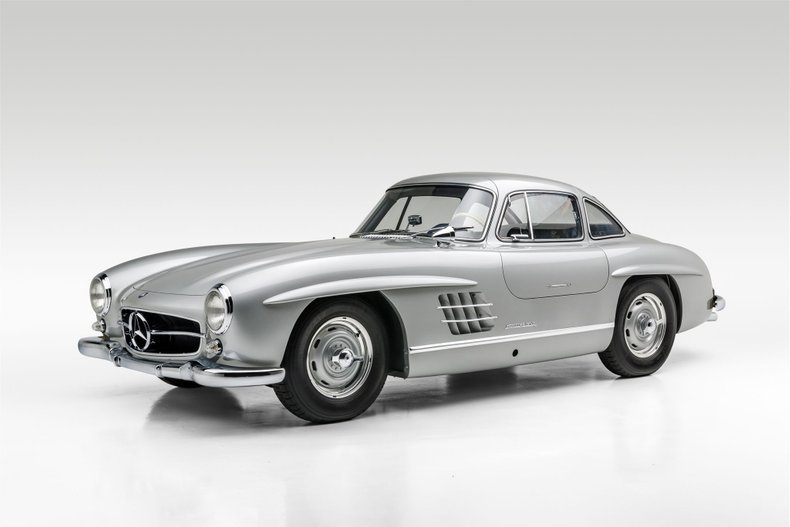 Originally completed on September 7, 1955, for Adolfo De Matos in Lisbon, Portugal. Purchased by a collector in 2010 and driven 1,000 miles on the Colorado Grand in 2011. This 1955 300SL had been well maintained and regularly used in driving events prior to the acquisition. Work performed under the last fastidious owner includes the installation of a complete set of desirable Rudge knock-off wheels, which necessitated the installation of new wheel hubs and new rear axles. The braking is now much more effective, following cleaning of the master cylinder, re-sleeved and rebuilt wheel cylinders, and new brake drums all around with new Kevlar brake shoes. The fuel system was serviced with the fuel tank cleaned out and the fuel injection pump was completely gone through and equipped with new lines. The oil cooler was cleaned out and a new water pump was installed as well. Other mechanical work includes a valve adjustment and the installation of new rear coil springs.

European Collectibles purchased this 300SL in 2012 and did a full concour cosmetic restoration in the original color combination, along with a full undercarriage and engine detail. No expense spared over a 14-month period from 2011 to 2012. During the restoration, this 300SL was completely disassembled so that every aspect could be properly addressed. The body was stripped to steel; the front and rear bonnet lids and doors were pre-fit with the bumpers, headlights, and front grill to ensure the absolute best result. Repainted in its original color combination Silver Grey Metallic (color code DB 180) with a completely new blue (COLOR CODE 333) leather interior and plaid inserts on the front seats. The engine was taken down to the block and a complete engine detail was performed. The belly pans were removed, and the tubular frame was stripped to steel and repainted to factory specifications. All the chrome was triple plated, and all the components are OEM or NOS.

The odometer currently reads 78,957 kilometers, which is believed to be original. Factory-original fitted luggage is also included with the car. Desirable features include a Becker Le Mans radio, as well as the original jack, and a complete tool roll in the trunk. All exterior body panels are straight and true, and the undercarriage is equipped with its belly pans.

Nicely presented and properly maintained and sorted, this 300SL has traveled approximately 1,400 kilometers since the restoration was completed in 2013. It runs and handles very well, especially on the open road, its natural element. Full photo documentation is included. It is in excellent condition both inside and out and is ready to be driven and enjoyed. Truly one of the best 1955 Mercedes Benz 300SL Gullwings that you will find, finished in a beautiful original color combination, and is a dream to drive!

The 300SL was the first Mercedes-Benz to be introduced in the United States before it was shown in Germany. It was unveiled in New York on February 6, 1954, and immediately took the automotive world by storm. The SL moniker reflected the pioneering use of multi-tube space frame construction. The gull-wing doors used on the racing version of the car were continued on the production car, as they were necessary to maintain structural integrity. The 300SL also featured fully-independent suspension in addition to its fuel-injected, 240 hp, 3.0-liter (2,996cc) straight-six with dry-sump lubrication; the motor inclined to the side to reduce the car's frontal area. Power was delivered through a four-speed manual gearbox, giving the car top speed of up to 150 mph and 0-60 acceleration in just 8.8 seconds, making it the fastest production automobile of its time. The 300SL was priced starting at $6,820, an impressive sum for the era.

Hoffman's original request of 1,000 cars was exceeded as the production of the semi-hand-built car reached just 1,400 units. The 300SL Coupe was discontinued after the 1957 model year when the 300SL Roadster replaced it. Today, it remains one of the most recognized, coveted, and collectible of all sports cars ever built.