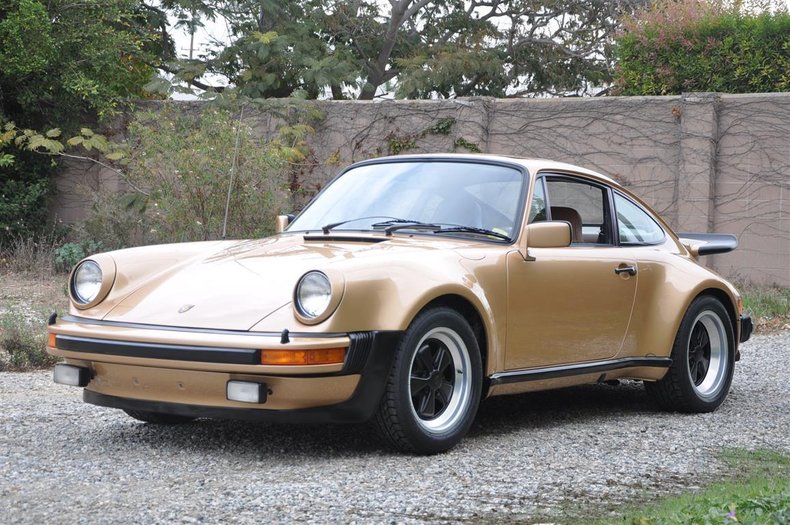 Painted to sample in an amazing color Casablanca Beige.

First sold to Pamela Azar of Malibu, California on October 31, 1976 delivered by Roth Porsche-Audi Inc in Salem, Oregon. Second owner was Ed O'Gara of O'gara Coach in Beverly Hills, California (Luxury car dealer of Aston Martin, Bugatti, Lamborghini, Rolls Royce & Bentley) the 930 was serviced by Rusnak Porsche + Audi in Pasadena, California & Beverly Hills Porsche +Audi. Third owner Duane Bowers who purchased this 930 in 1983- 1984 and has owned this vehicle for the past 30 years. TRE Motorsports in North Hollywood, California rebuilt the engine at 70,972 miles - including the following parts: new main, rod & intermediate bearings, new Goetze piston ring set, replaced rocker arm shafts, valve job with new guides, springs, stem seals & valves where needed, Crankshaft was inspected, micro polished – standard spec. Replace chains, ramps, idler pulley gears, cam drive gears. Inspect Turbo, Replaced Injectors & mounting blocks. Installed new cap rotor and spark plugs. (New clutch assembly was also installed). Duane truly loved this Porsche 930 Turbo but over the past 8 years only drove the 930 about 1,500 miles, it was just getting to difficult for him to operate the clutch with his bad knee. Before European Collectibles purchased this 930 Turbo - TRE Motorsports did a full service in July 2014 at 72,168 miles and $2,973 was spent. The paint is in beautiful condition and the interior is all original with the exception of the re-upholstered leather Sport Seats. The 1st generation of the 930 Turbo has & will only continue to appreciate in value. Complete with tools, books and service records!

Porsche began experimenting with turbocharging technology on their race cars during the late 1960s, and in 1972 began development on a turbocharged version of the 911. Porsche originally needed to produce the car in order to comply with homologation regulations and had intended on marketing it as a street legal race vehicle like the 1973 Carrera 2.7 RS. The FIA's Appendix “J” rules that brought about the 911 Turbo Carrera RSR 2.1 in 1974 changed in 1975 and 1976. The FIA announced that cars for Group 4 and Group 5 had to look like production cars and would be for "Normal Sale" with a means the distribution of cars to individual purchasers through normal channels of the manufacture. For the 1976 season, new FIA regulations required manufactures to produce 400 cars in twenty-four months to gain approval for Group 4. Group 5 would require the car to be derived from a homologated model in Group 3 or 4. To win the Group 5 Championship, Porsche would first have to have a car that could compete in Group 4 which led to the 934. For Group 5, Porsche would create one of the most successful racing cars of all time, the 935. While the original purpose of the Porsche Turbo was to gain homologation for the 1976 racing season, the marketing department soon awoke to the potential of this ultra high-performing machine when the original target of 400 cars was passed by the end of 1975. Since Porsche wanted to be racing for the 1976 season, they gained FIA homologation for the Porsche Turbo for Group 4 in Nr. 645 on 6 Dec '75 after they certified that 400 identical production cars had been completed. The 1,000th 1976 Turbo was completed on 5 May '76 and this production number allowed Porsche reclassify the Turbo for Group 3, series-production grand touring car in FIA Homologation Nr. 3076, 1 Jan '77. Additional variants to Group 4 (and Group 5) were promulgated in Nr. 3076 and included the 1977 model year (chassis nr. 9307700001, 1 Jan '77) and the 3.3 liter Turbo (chassis nr. 9308700001, 1 Jan '78). FIA Nr. 3076 remained in effect until replaced by FIA B-208 in 1 Mar 1982 for Group A/B when the homologation designation was changed from "Porsche Turbo" to "911 Turbo".

Ferdinand Porsche, who was running the company at the time, handed development of the vehicle over to Ernst Fuhrmann, who adapted the turbo-technology originally developed for the 917/30 CAN-AM car to the 3.0 litre flat-six from the Carrera RS 3.0, creating what Porsche internally dubbed as 930.

Total output from the engine was 260 PS (191 kW; 256 hp), much more than the standard Carrera. In order to ensure that the platform could make the most of the higher power output, a revised suspension, larger brakes and stronger gearbox became part of the package, although some consumers were unhappy with Porsche's use of a 4-speed whilst a 5-speed manual was available in the "lesser" Carrera. A "whale tail" rear spoiler was installed to help vent more air to the engine and help create more downforce at the rear of the vehicle, and wider rear wheels with upgraded tires combined with flared wheelarches were added to increase the 911's width and grip, making it more stable.