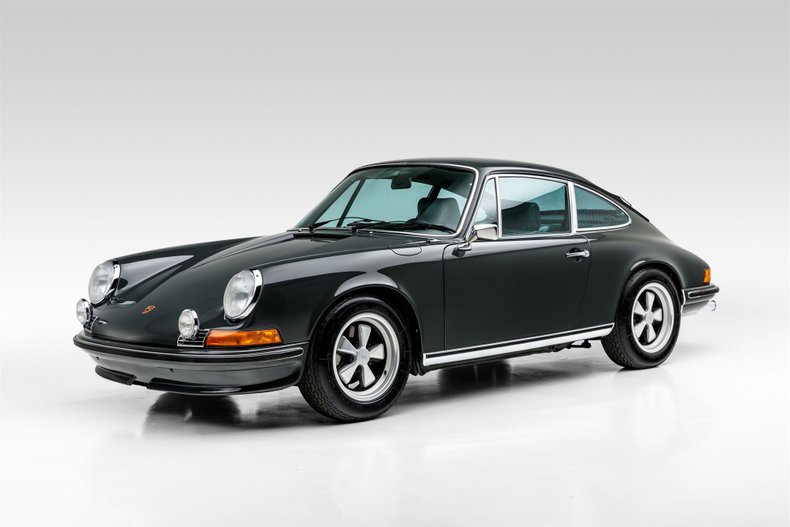 The 1973 911E cars were the mid-range 911 with the most torque and 165 horsepower. 1973 was the end of the early 911Es, which were one of the most unique 911Es produced. These 911s have always been cherished and enjoyed. The past owner spared no expense in the restoration! From 2012-2015, everything was rebuilt including the engine, transmission, brakes, and suspension by Aase Motors in Fullerton, California.

It is a California car that was found in December of 2011. Both the body and undercarriage were extremely dry and straight with no signs of damage or rust. It was also a nice running driver that was a very complete car with all of its important original components (including engine and transmission). In 2012, the restoration was started and the 911 went through two and a half years of an exhausting restoration. The 911E was carefully disassembled and sent to Pablo Gomez for the metalwork. Once completed, Dave Cardonna performed the paintwork and the color was done in a stunning color; Slate Grey. The interior was done in a German Green leather by Autobahn Interiors (Tony Garcia) out of San Diego.

Mechanically, the drivetrain including engine, transmission, and suspension, was done by Allan Faragalah at Aase Motorsport in Fullerton, California. This was a full engine rebuild from the case up with all factory correct parts being used including original factory Mahle 2.4 pistons and cylinders. The transmission was also completely rebuilt using all new gears, bearings and synchros. All of the gauges and clock have been restored along with the radio. The brightwork has been redone and all new rubber seals have been installed. John Tolen did the final assembly including a new wiring harness and refinished hardware. Tolen spent over 500 hours making sure everything was done as close to factory correct as possible. Factory air condition was added with original components and it blows ice cold. It is truly in exceptional condition!

The best part is not how good she looks but the way this 911E drives. It is pure Porsche. There is nothing like the way these long hood 911s handle. They are very nimble and you feel the road with every turn. This 2.4-Liter engine runs absolutely perfect and the 915 transmission shifts precisely and is very smooth. The steering is light and responsive. The four-wheel disc brake system stops the car straight and has been completely rebuilt along with the suspension. An ideal 911 for any vintage touring event.

This 911E was completed in July of 1973. According to the CoA it was ordered with the following options; US Equipment, Light Metal Wheels (Fuchs), Stabilizer Bars (F/R), Wheel Well Moldings, Comfort Equipment for 911 (S-Package), Tinted Glass All Around, Koni Shocks Instead of Boge, Rectangular White Fog Lights Halogen with Pirelli Tires.

Shown twice at the Steve McQueen car show and won both times. Also shown in Monterey at the Concours on the Avenue in Carmel and placed 2nd in class in August of 2014. Complete with original owner's manual, Certificate of Authenticity confirming matching numbers, extra key, spare space saver wheel/tire, original RS tire air tank, jack, original tool kit, and many restoration receipts from the build. Rare opportunity to find an early 1973 911E Coupe that has been restored and sorted to such high standards.

With power and torque increase, the 2.4-litre cars also got a newer, stronger transmission, identified by its Porsche type number 915. Derived from the transmission in the 908 race car, the 915 did away with the 901 transmission's "dog-leg" style first gear arrangement, opting for a traditional H pattern with first gear up to the left, second gear underneath first, etc.