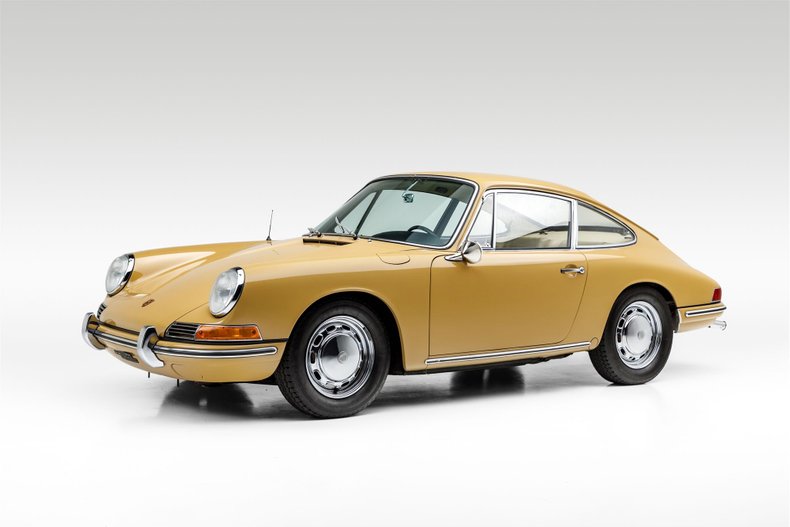 Originally delivered to the first owner, Barbara Foster, by Freeway Volkswagen Inc. in Seattle, Washington on April 20th, 1966. Under Mrs. Foster's ownership, from 1966-2011, the 912 was primarily serviced by Aker's Porsche repair in Seattle, Washington and by several other surrounding shops in the Seattle area with service records including a full engine rebuild in 1985. The first owner worked with the same mechanics for four decades and we have complete maintenance records back to the 1960s.

In 2012, Mr. Speare took ownership of the 912 and enjoyed the vehicle for a year before selling the vehicle to the 3rd owner. Records indicate that Mr. Krone took possession of the vehicle in late 2013 and it was not in need of much work. Krone took a road trip from Seattle back to his residence in the San Francisco area driving 1,000 miles without any issues. In 2014, Mr. Krone, had Autobahn Interior's reupholster the 912 with black German square weave carpets, new floor insulation, trunk carpet set, and re-built the front seats. Over the next two years, Mr. Krone also had upgrades done with, The Stable Porsche repair in San Francisco, California, which included: a rebuilt distributor, a new master cylinder, a rebuilt starter, a new fan belt, a new fuel filter, hoses, rebuilt Solex carburetors, and a new fuel sender. After years of enjoyment, the time came to move on and let someone else have the chance to appreciate this 912. Highly admired by Krone, he prefers the 912 over an early 911. His reasoning is that he has previously owned several 911's and he says nothing compares to the handling & drivability of this 912.

In early 2018, this 912 was sold immediately by European Collectibles to the 4th owner. During his ownership, he enlisted 911 Design in Montclair, California to carry out mechanical servicing and sorting. Receipts on hand for that work total $4,200. In September of 2019, European Collectibles sold this 912 to the 5th owner who enjoyed it for the past year until it was traded in on a 1965 Porsche 356C Cabriolet in September of 2020.

This is a very early production 1966 912, finished in its original color combination of Sand Beige with Beige leatherette upholstery and German square weave charcoal carpets. The dash top is original along with the ivory headliner. The early green gauges with chrome bezels and brushed aluminum dash are in pristine condition. Paint and interior are in excellent condition with just a bit of patina. This 912 is mechanically superb with a powerful 1600cc engine, producing 100hp, with a smooth-shifting 5-speed manual 901 transmission. Matching numbers per Certificate of Authenticity. Complete with jack, tools, spare tire, original window sticker, warranty book, and detailed ownership history spanning from new 1966-2019. An excellent opportunity to acquire an extremely well-documented solid West Coats example that runs phenomenal. If you're looking for a casual Sunday driver or a great daily driver, this 912 will be hard to beat. A stunning example of an early three-gauge and short wheelbase 912.

History (1966-1969)
Today, all but true Porsche enthusiasts may have forgotten that the Butzi Porsche-styled 901 (aka, 911) had a four-cylinder twin for the first five years of production. Introduced in 1965 as a replacement for the venerable old 356, the new four-cylinder Porsche brought the 911's new design across the entire product line. A 912 is essentially a 911 body paired with a pushrod four-cylinder, which was actually a slightly detuned variant of the 356SC motor. While the 912 did weigh 133 pounds more than the old 356C, the new body was more aerodynamic and had an optional five-speed gearbox, (a $75 option for the 912), which aided performance. Upon its introduction, the 912 sold for $4,700, and it outsold the 911 by a margin of two to one.