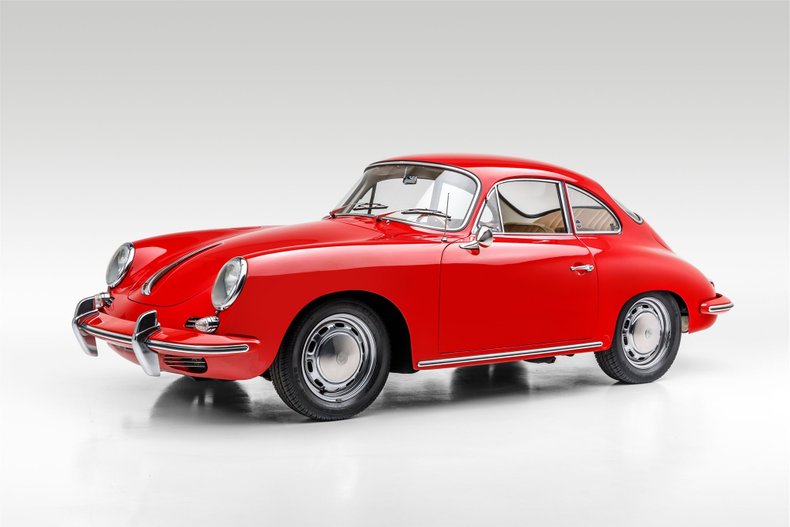 According to the Kardex, this 356C was delivered to the first owner, Barbara Burns, in Washington D.C. from Hoffman Motors in New York. It was special ordered in Bali Blue (color code 6412) with a Grey interior. This 356 has been exceptionally well-maintained, solid, and rust-free with a period-correct 356 SC engine no. 811731, producing 95 horsepower and is in excellent running condition. Currently finished in Signal Red (6407) with Tan interior. Options include a wooden steering wheel, Blaupunkt AM/FM radio, and chrome wheels.

Vic Pulizzi from Manassas, Virginia, was the second owner for over 17 years. Vic did a bare metal restoration in the 1990s by some of the best East Coast Porsche restorers. The paint and metalwork were done by Doug Dutton's Porstoration facility in Calverton, VA. Carl Cordel, from Rennsport in Alexandria, VA rebuilt the suspension and braking system. Autos International supplied the Tan vinyl interior and Tan German square weave carpets. After it was completed, the 356 was garaged most of its life and was only driven 2,000 miles. In 2008, European Collectibles purchased the 356, completed some additional maintenance, and sold the 356 to the third owner who has maintained the 356 and enjoyed her for the past 10 years. In October of 2018, European Collectibles resold this 356 to the fourth owner who has driven the 356 5,000 miles over the past 2 years. The 356 SC is truly one of the BEST 356s to drive.

History
The 356 was a lightweight and nimble-handling rear-engine rear-wheel-drive 2-door sports car available in hardtop coupé and open configurations. Engineering innovations continued during the years of manufacture, contributing to its motorsport's success and popularity. However, when the T6 got disc brakes in 1964, with no other visible alterations, they called it the model C, or the SC when it had the optional extra powerful engine. The last revision of the 356 was the 356C introduced for the 1964 model year. It featured disc brakes all round, as well as an option for the most powerful pushrod engine Porsche, had ever produced, the 95-horsepower (71 kW) "SC".