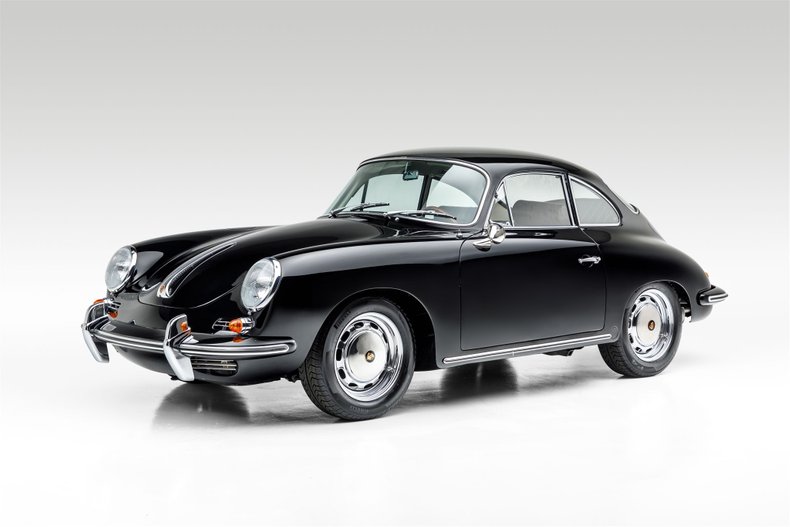 This 1964 Porsche 356C Coupe was completed at the factory on June 30, 1964 and finished with black paintwork over a black interior. Unlike today, it is unlikely that a dealer would have ordered this color combination for inventory, so we assume it was a special request. The factory Kardex confirms that the car was shipped to Competition Motors in Culver City, CA and sold to a Mr. Everrett Harper of Oxnard. By the late 1990s, it was owned by a well-known 356 collector in Stanton, CA. He later sold it to the owner of 356 Limited, Mr. Callaway, who sold it to a client and began a restoration on his behalf around 2005. After two years, the car had been painted, all chrome and brightwork restored and re-plated and the gauges redone by North Hollywood Speedometer. The project stalled and was sold complete but needing reassembly in 2010 to a longtime Porsche enthusiast in Huntington Beach. He stripped the original floors to steel and found them to be in excellent original condition except for the battery area, which was repaired prior to getting all new undercoating and a full suspension detail. The interior came next and it received new carpets and a headliner while the seats, door panels and dash were being redone. Vinyl was used throughout for durability and correctness, but the front seat faces received leather. Factory optional headrests with chrome plated brackets add luxury to the already beautiful seats. The dash is a thing of beauty with a gorgeous wood wheel, an original radio and stunning gauges with an extra section that reads oil pressure in addition to the standard fuel level and oil temperature. Upon completion of the restoration in 2013 it was sold to a local client and remained in his Porsche collection until being purchased by European Collectibles in Fall 2020. After our purchase, we installed new Pirelli P4 tires and performed a full service, inspection and road test. We are pleased to offer this 356, which is a nice driver in a very desirable color combination that retains its original matching numbers engine and transmission.