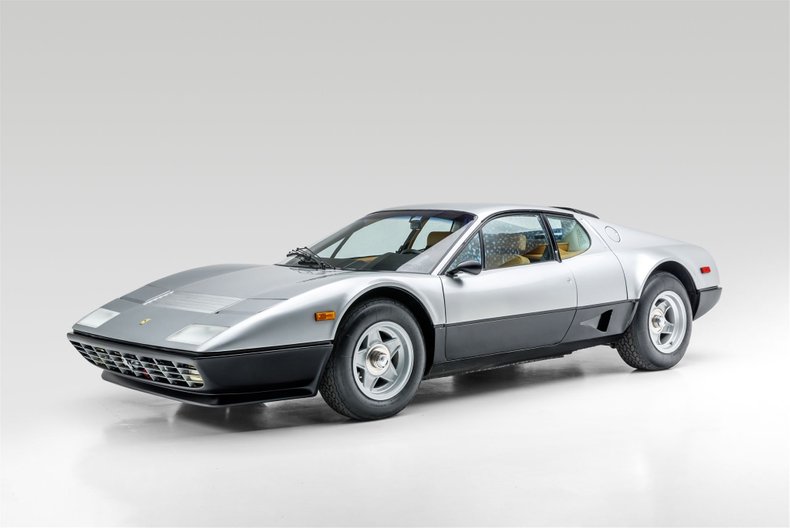 One of the last of the carbureted Boxers built, this 512 is a very original example with all matching numbers. Stored in an airplane hanger for over 25 years in Reno, Nevada. Untouched, unadvertised, and never shown by its original owner. Originally imported into the USA by Ferrari Compliance Inc. when new.

Finished in a rare Argento Nero (Silver/Black) with an original beige leather interior. Clear front parking indicators, yellow fog lights, and hex wheel nuts per French delivery regulations. DOT front and rear bumpers returned to original European spec. The headlights, taillights, and all of the glass are original and have no cracks or issues. The original Ferrari stickers and logos still affixed to the windshield.

Comes with period Escort radar and Reagan-omics cassette tapes from the first owner. Complete with recent service history, original selling dealer's service books, original books, Ferrari pouch, tools, jack, keys, wheel knock-off spinner hammer, and spares are present with original registration and tags from early years of ownership. Showing just 11,470 miles on the odometer, this is a very original example of Ferrari's great flat-12 sports cars. With a rising tide of interest in these cars, they certainly aren't becoming easier to obtain—especially examples as nice as this one.

• 2nd owner (bought through dealer John Temerian at Curated who obtained the car from the Trust). 11,000 original miles.
Titled in Montana.

Ferrari's revolutionary replacement for the legendary 365GTB/4 Daytona was this flat-twelve coupe using the same engine design developed for their Formula One cars. This horizontally opposed twin-cam engine was a powerhouse in its day, fed by four triple-throat Weber carburetors and its mid-ship placement gave the car phenomenal balance and handling. Boxers have always been desirable Ferrari collectibles and have been trading in the mid-six-figures for years, but recent caution in the market has brought them significantly lower and created an attractive opportunity.

The Ferrari Berlinetta Boxer (BB) is an automobile that was produced by Ferrari in Italy between 1973 and 1984. Replacing the front engine Daytona, it was the first in a series of Ferraris to use a mid-mounted flat-12 engine. The Boxer was designed by Leonardo Fioravanti and was the first mid-engined road-car to bear the Ferrari name and the Cavallino Rampante (prancing horse) logo. It was replaced by the Testarossa, which continued to use the Flat-12 engine.

The 365 GT4 BB was updated as the BB 512 in 1976, resurrecting the name of the earlier Ferrari 512 racer. This car has a 2 door coupé type body styled by Pininfarina with a mid-mounted engine powering the rear wheels. The name 512 referred to the car's 5 liter, 12 cylinder engine; a deviation from Ferrari's established practice of naming 12-cylinder road cars (as the 365 BB) after their individual cylinder displacement. The engine was enlarged to 4943cc, with an increased compression ratio of 9.2:1. Power was slightly down to 360 hp, while a dual plate clutch handled the added torque and eased the pedal effort. Dry-sump lubrication prevented oil starvation in hard cornering. The chassis remained unaltered, but wider rear tires (in place of the 365's equally sized on all four corners) meant the rear track grew 63 mm.