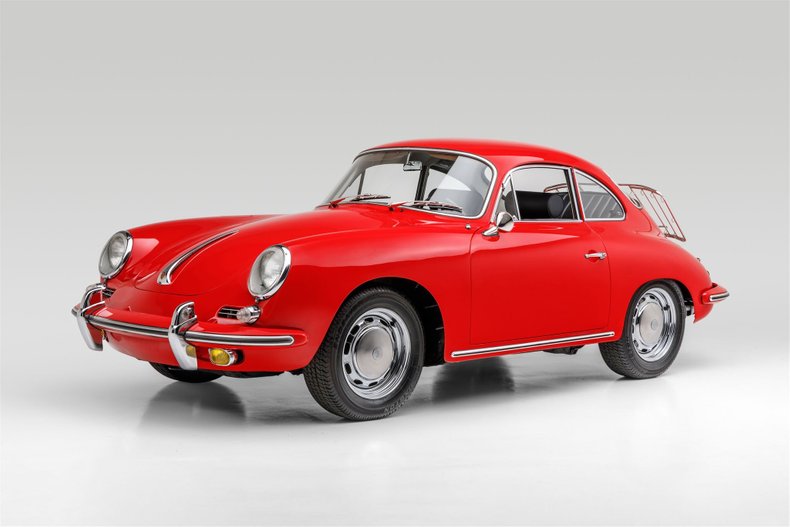 Completed on February 26, 1964, and delivered to the first owner in Luxemburg. The past owner from Seal Beach, California has enjoyed this 356 from 2012-2020. The paintwork is in excellent condition with nice chrome, rubber, and a black interior. Originally finished in Ruby Red (color code 6402) with a Black leatherette interior. Factory options include: 128 Hella amber fog lights, factory headrests, antenna, Blaupunkt AM/FM radio, chrome wheels, exterior mirror, luggage rack, compensator spring, and 195/65/15 tires, along with black German square-weave carpeting with black leather front seats and shoulder seat belts.

The 356SC holds a special place in Porsche history, not only as a sales success but also as an icon of one of the BEST 356's to drive; a classic automotive design. Motoring enthusiasts new to the classic car world are well served to acquire a “blue chip” Porsche such as this.

History
The 356 was a lightweight and nimble-handling rear-engine rear-wheel-drive 2-door sports car available in hardtop coupé and open configurations. Engineering innovations continued during the years of manufacture, contributing to its motorsports success and popularity. However, when the T6 got disc brakes in 1964, with no other visible alterations, they called it the model C, or the SC, when it had the optional extra powerful engine. The last revision of the 356 was the 356C introduced for the 1964 model year. It features four-wheel disc brakes, as well as an option for the most powerful pushrod engine Porsche, has ever produced, the 95-horsepower (71 kW) "SC".