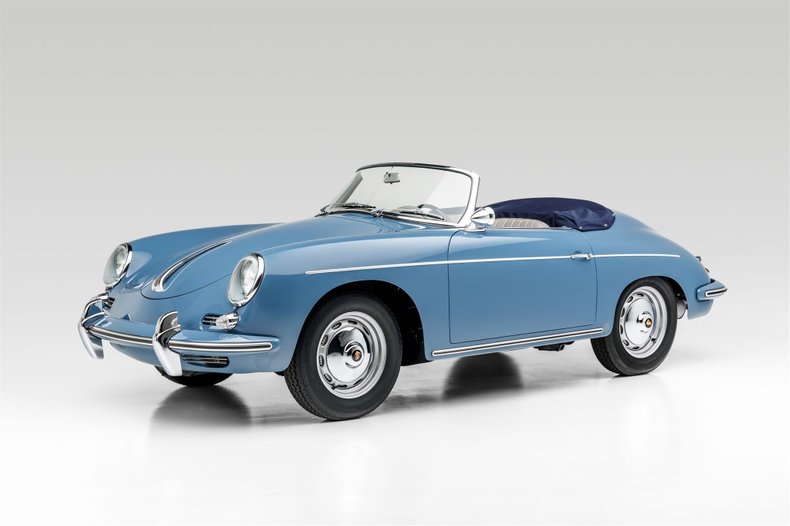 Per Kardex, it was original delivered to Chuck Iverson Inc via Competition Motors in Hollywood, California on June 6, 1960. The original family from Maine kept the car until 2017. It was passed through a well-respected Porsche automobile broker. The second owner purchased this 356 in October of 2017 and did a professional restoration to factory specifications. A bare-metal repaint was done in the correct Aetna Blue (color code 6003) and a correct German Light Gray interior per Porsche Certificate of Authenticity and Kardex. No major rust was found. The body is very straight, solid, and all the VIN numbered stampings on the body panels and deck lids are present. Aetna Blue is an exceptional color and is seldom seen in this color combination.

Autobahn Interiors in San Diego, California did the upholstery work. The seat frames and brackets were cleaned, polished, re-chromed, and the bases were powder coated. The front seats were done in leather and the door panels and dash were finished in leatherette with gray German square weave carpets. The original top frame was re-painted, and a new dark blue Hartz cloth top was installed along with a boot cover. New black rubber floor mats and center tunnel have been installed and the VDO gauges were rebuilt by Palo Alto Speedometer.

European Collectibles purchased this 356 a few months ago and has replaced the front and rear floor pans. The undercarriage and suspension have also been fully detailed to show condition. The windshield frame has been re-chromed, and a new windshield has been installed. A full tune and inspection have been done and everything works.

Complete with a tool kit, jack, owner's manual, and spare tire. Factory options include reclining seat brackets and Phoenix tires. Extremely well maintained and cared for! Roadsters have become highly collectible, and quality examples such as this 356 come to market infrequently. This 356 Roadster is perfect for 356 club shows, Cars & Coffee, or simply to enjoy with the top-down for weekend touring. A beautiful example offered at a fraction of the price of a Speedster.

Porsche's popular 356 Roadster was introduced for the 1960 model year as a replacement of the one-year-only Convertible D, the Speedster's more civilized successor. The new T-5 Roadster brought several marked changes in appearance: The front fenders and headlamps were raised, as were both the front and rear bumpers, to better deal with urban parking. New vertical bumper guards also helped in that respect. New brake-cooling intakes were added to the nose below the front bumper.