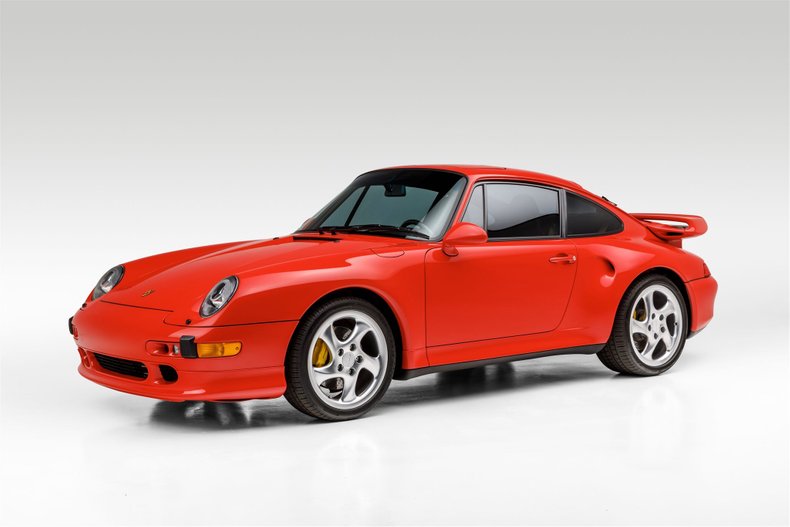 During the second to last year of production of the 993 (1997), Porsche offered the 993 Turbo S, which was manufactured by the Porsche Exclusive department. The Turbo S is a high-specification Turbo including a power upgrade to 450 hp (DIN) [424 hp (SAE) for the American market] achieved by larger KKK K-24 turbochargers, an additional oil cooler, and a modified Motronic engine management system. The inclusion of extras including carbon fiber decoration in the interior makes it different from the earlier lightweight; spartan 964 Turbo S. The 993 Turbo S is recognized by yellow brake calipers, a slightly larger rear wing, a quad-pipe exhaust system, a front spoiler with brake cooling ducts (on European market cars), carbon fiber door sills with 'Turbo S' badging and air scoops behind the doors. This was the last of the air-cooled 911 Turbos. The curb weight of the car amounted to 1,500 kg (3,307 lb). Performance figures include a 0–97 km/h (60 mph) acceleration time of 3.6 seconds, 0–161 km/h (100 mph) acceleration time of 8.9 seconds, and a top speed of 296.6 km/h (184.3 mph).

Like all Turbo S's, at the heart is a flat six-cylinder engine fitted with a pair of K-24 turbochargers that output 430 horsepower in U.S. specification. Power is driven through a six-speed manual transaxle and an all-wheel-drive system that was developed for the earlier Type 964 Carrera 4. The Bosch Motronic engine-management system is upgraded to produce more power and an additional oil cooler was added to handle the increased heat load. Large 12.68-inch power-assisted ventilated and cross-drilled multi-piston disc brakes with yellow calipers deliver impressive stopping power from any speed.

Unlike some other special edition models, Porsche did not sacrifice creature comforts and usability for track performance with the Turbo S. Inside is a luxurious full black leather interior with generous amounts of carbon fiber trim on the lower portion of the dashboard, around the gauges, along the doorsills, on the center console, door panels, and door pulls. The window sticker notes the optional addition of black floor mats, carbon fiber and leather-wrapped steering wheel, racing-style hardback seats, and a digital sound package. Rounding out the optional extras is an infra-red security system.

According to the Carfax report, this Porsche has had five owners, originally delivered by Burt Smith Porsche in Saint Petersburg, Florida then shipped to Fort Lauderdale with 11 miles on March 28, 1997. Accrued by the second owner May 30, 2001, with 3,000 miles in Illinois. Sold to the third owner on March 23, 2007, with 7,449, and shipped to Southern California and only driven 563 miles until July of 2012 when it was sold to the fourth owner in the Denver, Colorado area. Finally, it was sold to the current owner in Los Angeles in August of 2017 with 8,213 miles and has been enjoyed for the last 3,500 miles.

The Turbo S delivered a stunning performance in a package as luxurious and exclusive as Porsche's discerning customers had come to expect. It really was the ultimate supercar that could comfortably be driven as a daily commuter. Collectors today value the Turbo S for its rarity, performance, timeless styling, and being of course the last iteration of the air-cooled Turbo.