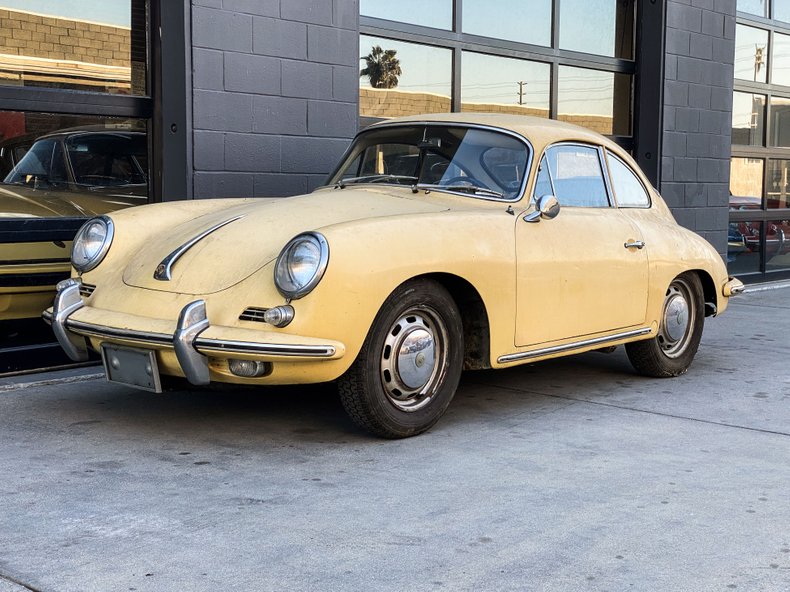 Extremely dry and all original time capsule finished in its factory color combination of Champagne Yellow with Green leatherette upholstery. Complete 356 with good gaps and panel fit. The exterior components include Sekurit and Sigla glass, Hirschman antenna, Durant side view mirror, Hella sealed beam headlights, turn signal indicators, Hella 128 fog lights, and four KPZ 4.5” x 15” date coded wheels. The interior is original, except for the carpets, factory VDO instrumentation, and the VDM steering wheel. The 1600cc flat-four engine (no. P717037) is period correct but according to the Kardex, the original engine no. was P716551, which is only 486 engines apart. The engine is running on external fuel and has been driven around the block. This 356 will need the fuel system to be cleaned out and the brakes will need to be rebuilt to make it a driver. A perfect restoration candidate to complete a full restoration or to sort mechanically and enjoy as is!

Known internally as the T6 and designed by Erwin Komenda, the Porsche 356C came out for the 1964 model year. External changes were minimal in typical Porsche fashion, external changes were minimal, but with the 356C, a Porsche finally had disc brakes front and rear. The range of available engines for the Porsche 356C was reduced to three, as the 60hp engine from the 356B was discontinued. The 75hp engine from the old 1600 Super, therefore, became the base engine, the S-90 was replaced with SC producing 95hp, while the final and most powerful version of Porsche's complex Carrera four-cam engine made 135hp in the 2000 GS Carrera.

The Porsche 356C was the final Porsche model that debuted before the completely new 911. It therefore mainly featured mechanical rather than aesthetic improvements. This model also served as a development for Porsche into the widespread use of all-round disc brakes and much work was undertaken to improve the tail-heavy bias of earlier cars with the addition of larger anti-roll bars and a steering damper. The 356C represents the final and most developed version of the model that made Porsche's reputation on roads and racetracks throughout the 1950s. It was a far cry from the handful of basic sports cars made in a small village in postwar Austria. Porsche had grown exponentially and gained an enviable reputation all over the world for building high-quality, fun, and quick sports cars. It was almost all thanks to the 356, and the 356C as a worthy send-off.