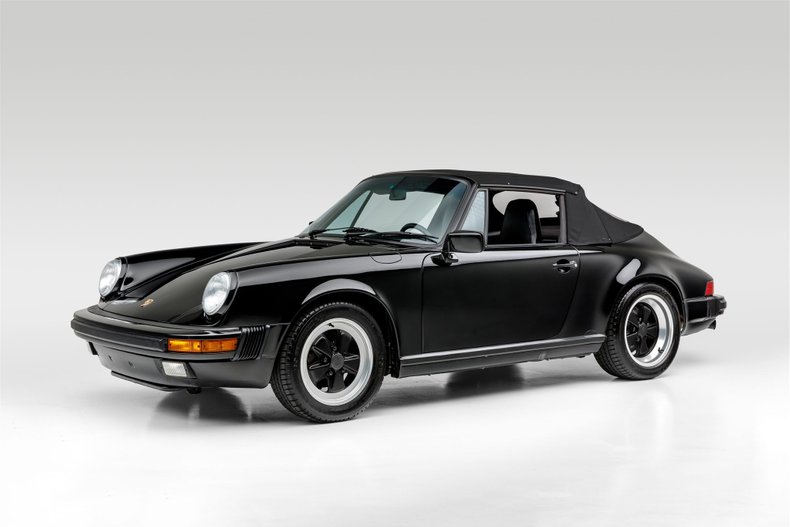 Three (3) owner car, incredibly dry and rust-free, finished in a very desirable color combination of Black with Black upholstery and a Black soft top. The exterior paintwork is absolutely stunning and is original with excellent gaps and panel fit. The interior is all original and in very good condition with cold AC and VDO instrumentation. Mechanically, a powerful 3.2L flat-six engine runs extremely well with 217HP and the coveted G50 5-speed transmission. Equipped with Michelin Pilot Sport A/S 3 (205/55 ZR16 Fronts, 225/50 ZR16 Rears), refinished Fuchs wheels, and an aftermarket radio. Originally delivered by Gateway Porsche in Portland, Oregon according to the original window sticker. Options include partial leather front and back, Reno radio, steering wheel with raised hub, limited-slip differential, shorter gear shift lever, and sport shock absorbers for a total price of $61,062.00.

The earliest records begin April 3, 1991, with 676 miles, the vehicle was sold by Sunset Porsche Audi in Beaverton, Oregon to Barry Menashe of Portland, Oregon. After only one year of ownership, it was sold to the third owner also from Portland, Oregon. He owned this 911 Cabriolet from 1992-2020 and kept the vehicle regularly maintained and serviced, supported by extensive documentation. In 2011 the 911 was moved to Scottsdale, Arizona to a winter vacation home and serviced every year by Becks European and/or Stuttgart Southwest. On February 28, 2016, V.I.P. European Auto Interiors installed a new German black canvas top along with a new headliner for $2,735.68. The most recent service was completed at Stuttgart Southwest in Tempe, Arizona including a valve adjustment, replace oil lines, oil change, and resurface lower valve cover for $1,086.03. Complete with 2 sets of keys, original window sticker, spare tire, tire compressor, tool kit, and documentation from 1991-2020. An amazing opportunity to acquire the last year of the 3.2L Carrera in original condition with extensive documentation.

History
When all was said and done the model 911 3.2 Carrera did not disappoint. It not only lived up to the standards set by the model 911SC that it replaced, but it also exceeded all expectations. Now a much sought-after classic car for Porsche enthusiasts, the model 911 3.2 Carrera was the last version of the original 911 series. The model 911's produced after 1989 all came with completely new exterior styling as well as new brake, suspension, and electronic technology. You could say the 3.2 Carrera was a grand finale of sorts, but it was certainly not the end of the road for the 911.