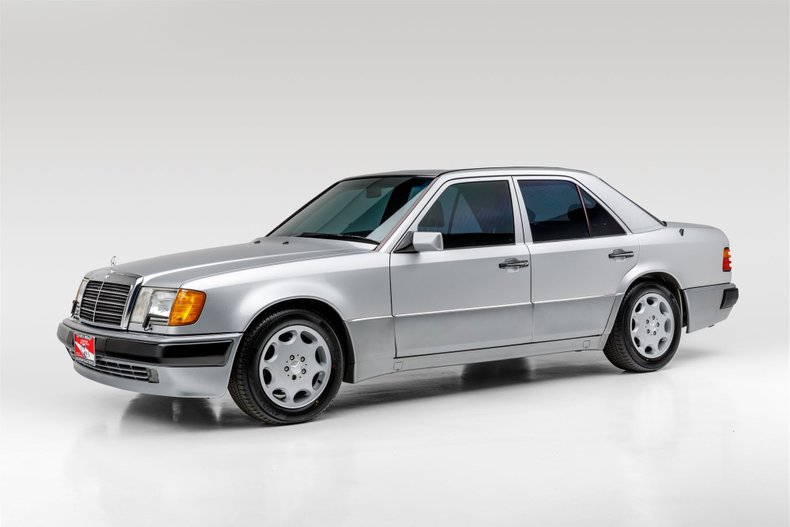 Originally delivered in Brilliant Silver Metallic with black leather upholstery. The paintwork is all original and in immaculate condition with perfect gaps and panel fit. Exterior trim and chrome are in excellent condition along with all original sigla glass. The interior is all original and features four (4) leather Recaro seats, an upgraded Mercedes leather/wood steering wheel, and an electric sliding sunroof. Mechanically, this 500E is fitted with a 4,973cc V8 that is capable of producing 322HP with 354lb/ft torque and an acceleration of 0-62.1 in 6.1 seconds. Equipped with 4-speed automatic transmission, OEM 16” Mercedes wheels, integrated Nokia cellular telephone, and the original AM/FM Mercedes Benz radio. Complete with dealer-supplied books, original window sticker, two keys, spare, car cover, toolkit, jack, and records from 1993-2021. A well-preserved and well-documented example that has never needed any major services due to like-minded owners who gave this vehicle consistent servicing over 28 years.

On July 21, 1993, Mr. Davis, purchased the 500E new from Gulf Stream Motors Inc. in West Palm Beach, Florida with 38 miles for $69,166.69 using his 1991 Acura NSX as a trade-in. Mr. Davis kept the 500E in Jupiter, Florida, and always serviced his vehicle on time with the dealer until 1999. Almost 44,000 miles later, the first owner decided to consign his vehicle with Rick Hill Motorsports where it was purchased by the second owner Mr. Padgalskas and his son, David, in 2005. Mr. Padgalskas was a die-hard Mercedes enthusiast who never allowed the 500E to see snow or rain and lived in Spokane, Washington. In 2008, Mr. Padgalskas passed away and his son took possession of the vehicle and continued in his father's footsteps of regularly maintaining and servicing the 500E. In 2016, at 59,340 miles, Mercedes Benz of Portland, Oregon completed a full service which included: replacing ignition caps & rotors, replaced engine wiring harness, repaired washer system, replaced A/C system pressure cap, brake fluid flush, replace oil filter & oil, replace suspension system fluid, and repair heat function on seats. In 2017, the vehicle was purchased by the 4th and current owner, who kept the vehicle in Monterey, California. He enjoyed his 500E for 4 years, servicing it as needed, and only accrued a total of 951 miles. Four new Yokohama Avid Ascend GT 225/55 R16 tires have just been installed on the stock rims along with a new battery. Complete with tools, books, original window sticker, original purchase invoice, and records. Rare opportunity to purchase a rare original paint 500E.

History
In 1990, Mercedes decided to develop a high-performance version of their successful 300E model which debuted in 1986. Porsche was contracted to engineer the modifications necessary to transform an ordinary 300E into a very special 500E. However, the extensive modifications to the floor and external sheet metal meant the 500E could not easily be built on the normal assembly line at the busy Mercedes Sindelfingen plant. So, Mercedes called upon Porsche to perform assembly of the 500E at Porsche's Rossle-Bau plant in Zuffenhausen. The contract called for 8 to 12 500E's per day, 2400 per year, built to the highest quality.