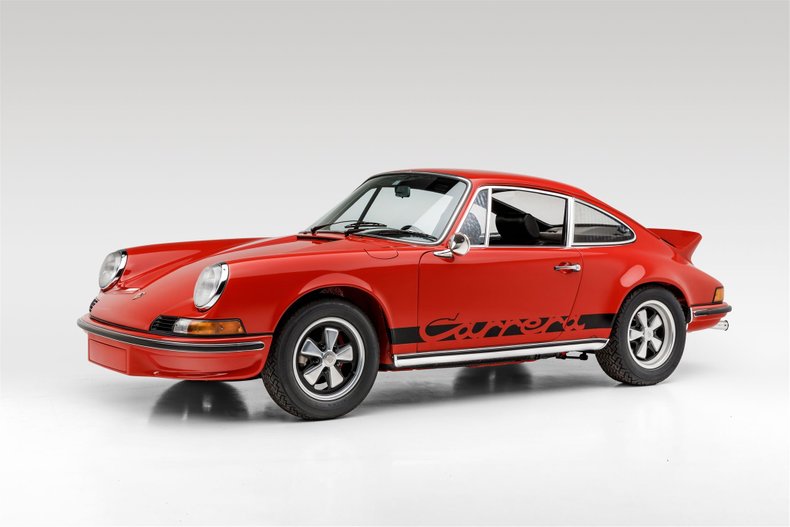 According to the authoritative work shown in the Carrera RS book by Dr. Thomas Gruber and Dr. Georg Konradsheim, this stunning 911 is just one of 245 Carrera RS examples delivered new to Italy and just one of 42 examples finished in the factory color of Bahia Red. The Carrera RS book also records the car's original equipment, including sport seats left and right that were upholstered in black leatherette with corduroy inserts, and a limited-slip differential. As chassis 574, this RS is relatively early in the second series of production. The second-series examples, very similar to the first series, retain the thin-gauge sheet metal and other lightweight features that were eschewed on the later third-series cars.

After its time in Italy, this RS made its way to Japan, where it remained until it was imported by Symbolic Motorcars of La Jolla, California by 2011, and sold that same year. One of the previous owners completed a bare-metal repaint in the correct single-stage Bahia Red paint. This work was conducted by Custom Cars Unlimited, a Chicago-based firm that has prepared cars for the Pebble Beach Concours d'Elegance. During this process, the car was stripped, and the body was reported to be in excellent condition. The car has since remained well-cared-for with the last two previous owners' collections and in a climate-controlled facility. This Porsche RS has been maintained and serviced by Continental Ferrari, Napleton Westmont Porsche, Porsche of Monterey, and Olsen Motorsports, which carried out a full engine-out service and rebuild. The current owner has done two rallies (Ramshorn Rally and Going To The Sun Vintage Car Rally) in 2019 and has driven over 2,000 miles with no issues.

European Collectibles has recently removed the complete driveline to do a complete concours undercarriage detail to factory specification. All the suspension and the brake components have been CAD plated, powder-coated, and/or painted. The original Fuch alloy wheels have been refinished in the correct RS finish with new PIRELLI CINTURATO CN36 N4 185/70 VR15 on the front and 215/60 VR15 on the rear. The factory sport seats have also been reupholstered in black leatherette with corduroy inserts.

This RS is accompanied by books, tools, and service records and its matching-number engine per its Porsche Certificate of Authenticity. This desirable second-series RS 2.7 Touring would make a fantastic addition to any collection, as an exceptionally versatile and rewarding sports car. It promises both visceral performance and acclaim at marque gatherings, in addition to being one of the most revered and imitated Porsches ever built.

History
The Carrera RS 2.7 of 1973 was conceived as a pure homologation special, as Porsche needed to build 500 road-going examples to qualify its new RSR for Group 4 GT racing. The RS was a substantially modified variant of the already potent 2.4-liter 911 S. By increasing displacement, introducing various weight-saving measures, stiffening the suspension, and fitting aerodynamic support, Porsche created an unrivaled sports car. In total, only 1,580 examples of the RS 2.7 were built.

The Carrera RS 2.7 was upgraded in almost every way compared to the 911 2.4 S on which it was based, featuring an enlarged 2.7-liter engine with Bosch mechanical fuel injection developing 210 bhp, a revised and stiffened suspension, larger brakes, rear fender flares to accommodate wider wheels, and an unmistakable “ducktail” spoiler to aid high-speed handling. Made available in M471 “Lightweight” and M472 “Touring” trim, the Touring model was more luxuriously equipped and practical for road use, while the lightweight model was better suited for track use.