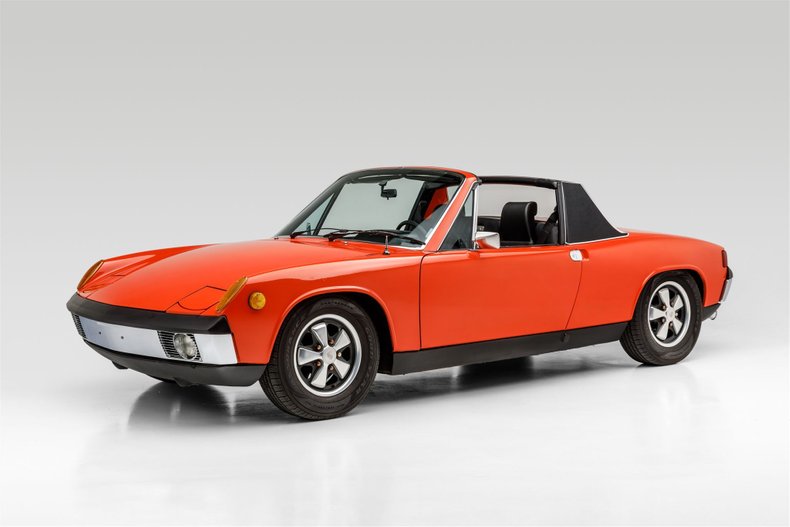 According to the Certificate of Authenticity this 914-6, was originally finished in Tangerine (Blood Orange) color code 23 with a black leatherette interior. The current owner from Southern California purchased this 914-6 two and a half years ago. Previously, owners lived in Arizona, California, and West Virginia. This 914-6 was optioned from the factory with fog lights, a leather steering wheel, tinted side glass, and a Blaupunkt AM/FM Frankfurt radio has been installed.

The 14” x 5.5″ Fuchs alloy wheels (date stamped 6/70) and were refinished by Al Reed of Southern California and are wear Goodyear Assurance 195/70R14 tires. The interior is finished in black leatherette, with a leather-wrapped steering wheel, the seats were recovered in 2017, Coco mats were installed. This 914-6 is very straight and rust-free with excellent gaps and panel fit. Complete with Porsche Certificate of Authenticity, original owner's manual, tool kit, spare tire, records dating back to 2015 totaling over $28,000. A great opportunity to acquire an outstanding 914-6 in a very desirable color combination.

Porsche's 914-6 variant featured a carbureted 110 bhp (82 kW; 112 PS) 2.0 L flat-6 engine from the 1969 911T, placed amidships in front of a version of the 1969 911's "901" gearbox configured for a mid-engine sports car. Karmann manufactured the rolling chassis at their plant, completing Volkswagen production in-house or delivering versions to Porsche for their final assembly. The 914-6 models used lower gear ratios and high brake gearing in order to try to overcome the greater weight of the six-cylinder engine along with higher power output. They also featured five-lug wheels and ignition on the left side of the steering wheel. Suspension and handling were otherwise mostly the same.

By the late 1960s, both Volkswagen and Porsche were in need of new models; Porsche was looking for a replacement for their entry-level 912, and Volkswagen wanted a new range-topping sports coupe to replace the Karmann Ghia. At the time, the majority of Volkswagen's developmental work was handled by Porsche, part of a setup that dated back to Porsche's founding; Volkswagen needed to contract out one last project to Porsche to fulfill the contract and decided to make this that project. Ferdinand Piëch, who was in charge of research and development at Porsche, was put in charge of the 914 project. Porsche 914 replaced the top of VW's line, the Type 34 Karmann Ghia.