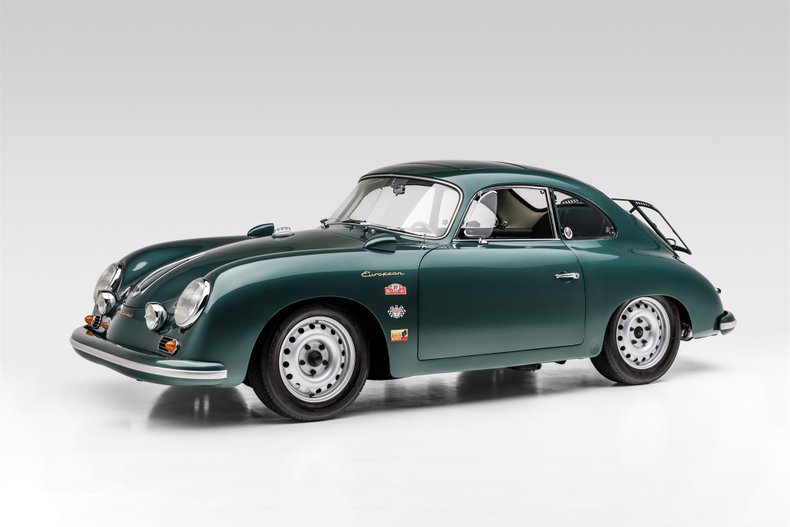 According to the Porsche Certificate of Authenticity, this 356A Coupe was completed at the Zuffenhausen-based Porsche factory in May of 1956. This 356 was factory-prepared as a 1600 SUPER, with the more powerful 75 horsepower engine. Equipped with the desirable “Golde” sunroof option, radio with antenna, a time clock, white wall tires, a speedometer in miles, and sealed beam headlights. The Porsche left the factory finished in Black (5601) with a Red (R) leather interior and was delivered to Austria to Count Palfy.

The 356A Super Sunroof Coupe would later be exported to the United States and ended up with a Chicago-based Porsche enthusiast. A comprehensive restoration was done to achieve a GT Outlaw look. While retaining its original sunroof body and numbered panels, this 356A has been treated to period-correct, Outlaw trim, which suits these 356 Coupes so well. A high-performance 912 engine (type 616/36) was rebuilt by Shasta Design Engineering, and a four-wheel disc brake system was installed to ensure proper stopping power. Carquip was commissioned to rebuild a 4-speed manual 644 transmission with 741 internals. Larger 5.5” x 15” painted wheels with Bridgestone tires were also fitted to ensure the best possible handling.

The exterior is finished in the one-year-only, factory-correct 1956 Lago Green Metallic, while the interior is trimmed in a matching Green vinyl material with green German Square weave carpets and GT vinyl. It has been tastefully prepared with period GT options, such as lightweight Speedster bucket seats, a Nardi wood-rimmed steering wheel, Heuer timekeepers, clock, and fire extinguisher mounted behind the passenger's seat. Outside, front Marchal body mount driving lights are fitted, a quick-release fuel filler extends through the front hood, GT bumper deco trim, GT mirrors, Plexiglass side windows, Plexiglass pop-out rear side quarter windows, body mount vent windows, European headlights, a louvered GT deck lid, and a luggage rack is fitted on the rear decklid to place luggage on for rallies or weekend get-a-ways. A peashooter exhaust has been installed to ensure the sound matches this Outlaw's staggering performance.

Offered with extensive records over the past 30 years, this 356 is ready to enjoy and will qualify for many driving events including the Colorado Grand, California Mille, Copperstate 1000 Road Rally, and many other events. This is an awesome go-fast road touring 356 with the accommodating space and practicality of weather protection no matter what an event may throw at you. This exquisite Porsche 356A Outlaw is the best of all worlds and a legendary Porsche marque.