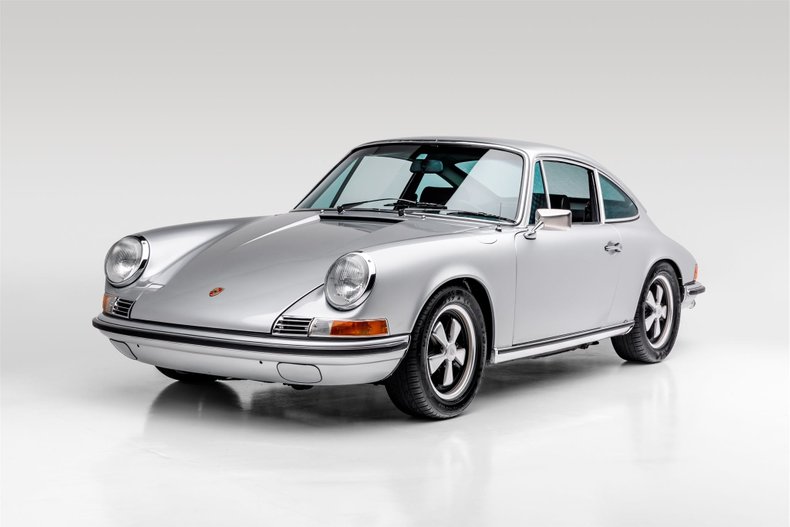 One owner for 16-years who restored this 911 over a 10-year period. Beautiful condition with no major imperfections, nice panel fit, painted in the original color Silver Metallic (color code 925) with a correct German black interior done by Autobahn Interiors in San Diego, California. The front seats are nicely trimmed with the correct pleats in the seat bottoms and the German charcoal carpets are in excellent condition. The door panels are near perfect with the original door pockets that have been recovered. The dash was restored and is very nice with no cracks. All the VDO gauges are like new and have been cleaned, detailed, checked, and are all functioning properly. The Becker Mexico AM/FM radio is not currently working. However, the original leather-wrapped steering wheel is in amazing condition with a very nice butterfly horn ring.

Exterior has very nice brightwork and chrome. Tinted factory glass all around with no major flaws. The Fuch alloy flat 6s are restored and the anodized finish is correct with Kumho Ecsta 205/55 R15 tires. The headlights have been upgraded to European Style H4s, new turn signal lenses have been installed, along with new bumper deco trim. Everything is correct as it came from the Porsche factory.

Mechanically she runs superbly with plenty of horsepower. The engine and transmission were both completely rebuilt by European Performance, Inc in Raleigh, North Carolina, and the MFI pump was rebuilt by Supertec Performance in Fallbrook, California. Excellent overall condition and this 911 has been regularly serviced with extensive receipts from 2003 to present.

The 2.4-liter engine is the most powerful 911T with the first year of the mechanical fuel injection pump. It was also the first year for the traditional 915 manual transmission after 8 years of the 901 dogleg. It starts right up and idles smoothly with no issues and has a very strong pull as you accelerate through the gears. The transmission shifts perfectly throughout all the gears and has no grinding with a solid clutch. The four-wheel brakes stop the 911 with no hesitation. This 911T is an absolute blast to drive and will put a smile on your face every time your go on a drive.

With the power and torque increases, the 2.4 L cars also got a newer, stronger transmission, identified by its Porsche type number 915. Derived from the transmission in the Porsche 908 race car, the 915 did away with the 901/911 transmission's "dog-leg" style first gear arrangement, opting for a traditional H pattern with first gear up to the left, second gear underneath first, etc. Some say this was because the dog-leg shift to second gear was inconvenient for city driving, others say it was due to Porsche's desire to put 5th gear outside the main transmission housing where it could easily be changed for different races. The Sportomatic transmission was still available but only as a special order.

In 1972 a tremendous effort was made to improve the handling of the 911. Due to the 911's unusual engine placement (rear-mounted, with most of the vehicle's weight concentrated over the rear axle) early 911's were prone to oversteer when driven at the limit, and could easily spin in the hands of an inexperienced driver. In an attempt to remedy this, Porsche relocated the oil tank from its position behind the right rear wheel to in front of it. This had the effect of moving the weight of almost 8.5 l (9 US quarts) of oil from outside the wheelbase to inside, improving weight distribution and thus, handling. To facilitate filling of the oil tank, Porsche installed an oil filler door (much like the fuel filler door on the left front fender) on the right rear quarter panel. Unfortunately, this unique design was scrapped after only one year, some say because inattentive gas station attendants were putting gas in the oil tank. The oil tank was subsequently moved back to its original position for the model year 1973 and remained there until it was moved back within the wheelbase for the 964 models.