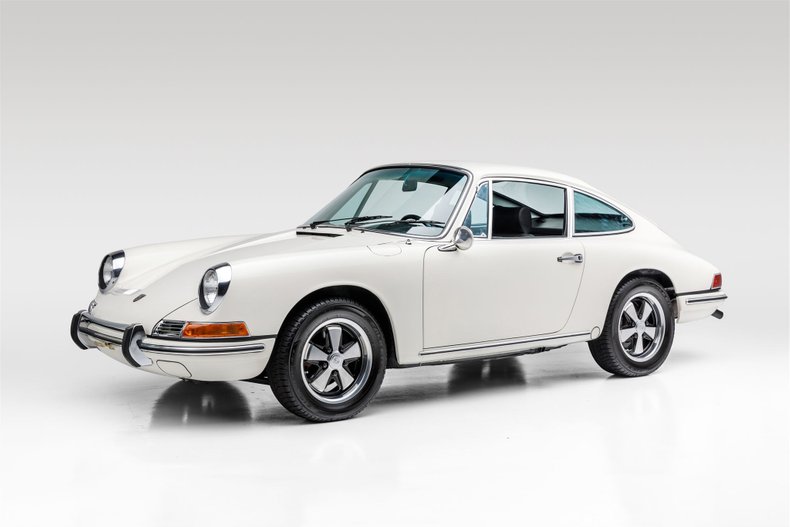 Finished in its factory color combination of Light Ivory with a Black interior, this 912 has California black plates with excellent gaps and panel fit. Factory equipment includes tinted glass all around, antenna, loudspeaker, chrome ventilated wheels, and a leather steering wheel. The brightwork, rubber seals, and exterior trim are in very good condition along with the original Sekurit glass. The interior features the one-year-only door panels (in excellent shape), reupholstered front seats in black vinyl with houndstooth inserts, AM/FM Blaupunkt radio, and factory VDO instrumentation which is functioning as it should. Mechanically, the matching 1600cc flat-four engine runs strong with a manual 4-speed gearbox and four-wheel disc brakes.

The earliest known documentation begins with Don Mellon who had a valve adjustment by Dieter's Porsche Service in San Diego, California on September 17, 1970, at 30,704 miles. Mr. Mellon continued regularly scheduled maintenance at Dieters until the end of his ownership in 1996 (26-years later). In 1997 the vehicle was transferred over to the Middleton family who owned this vehicle for the next 15 years. During their ownership, the 912 was maintained by Dennis Sherman Foreign Car Service in La Mesa, California. The last invoice on file, records the 912 completing a transmission service at Auto Sport Haus in San Francisco, California on October 19, 2004, including a new flywheel seal, new clutch, and replacing the main shaft. Over their ownership, they accrued 34,528 miles and maintained a strict maintenance regiment.

In 2019, European Collectibles purchased this 912 and performed a full service including: rebuilding and adjustment of the carburetors, install a 022 distributor, new oil hose to filter, new generator pulley and hub, new shifter rod slide ring, replace the tie rod end boots, repair throttle linkage, new fuel lines, and installed new brake pads. It was sold to the current owner who has enjoyed this 912 on the windy roads of Colorado for the past few years. Complete with spare tire, Kardex, and records from 1970-2012. An incredibly dry, well documented, 912 driver that is well sorted and is ready to enjoy.