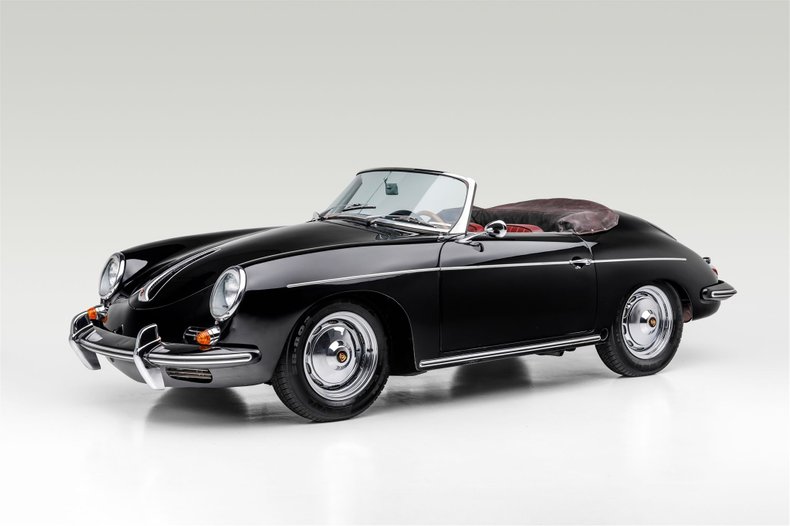 One of only 472 T5 Roadsters produced by D'Ieteren Freres in 1961, just before the Roadster was phased out in favor of the Cabriolets. It was the 108th from the last T5 Signal Grill Roadster built. This is a good running and driving 356 with its matching Normal 1600cc engine (Type 616/1), matching 741 manual 4-speed transmission, and four-wheel drum braking system.

According to the Porsche Kardex, this Roadster was delivered by Hoffman Motors Corp in New York, and the original color combination was Slate Gray (color code 6001) with a Light Gray interior. Presently finished in Black with a Red interior, tan soft top, and black boot cover. Older paint with some paint imperfections, needing cosmetic restoration to be perfect, but it is complete with solid rust-free floor pans and battery box. This is a turn-key driver that is ready to enjoy in as-is condition.

This 356 Roadster is perfect to enjoy with the top-down during weekend touring. Complete with two keys, owner's manual, Porsche Kardex, Nardi wood steering wheel, reclining seat brackets, radio installed under the dash, spare oil filter, spare fan belt, lug wrench, and a jack. Roadsters of all years have become highly collectible and hard to find. A great opportunity to build what you have always dreamed of.

History
Porsche's popular 356 Roadster was introduced for the 1960 model year as a replacement of the one-year-only Convertible D, the Speedster's more civilized successor. The new T-5 Roadster brought several marked changes in appearance: the front fenders and headlamps were raised, along with both the front and rear bumpers, to better deal with urban parking. New vertical bumper guards also helped in that respect. New brake-cooling intakes were added to the nose below the front bumper. There were new cast-aluminum Alfin brake drums with iron liners, and the brakes had improved sealing to repel water.

The new Roadster shared many of the comfort attributes of the Convertible D, including roll-up windows, comfortable seats, a well-constructed convertible top with a tan-painted frame, and a wraparound plastic rear window. For those with competition in mind, the windshield could be removed, and roadsters, like the Speedster and Convertible D, soon became popular in amateur sports car racing around the world.