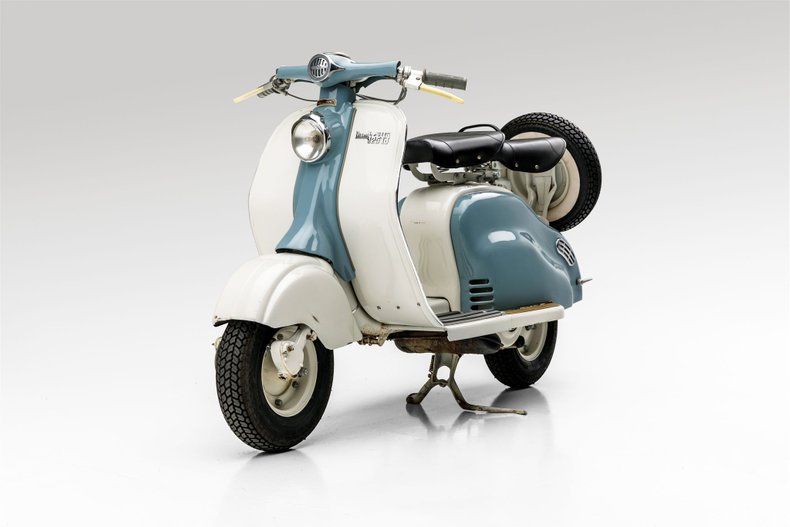 Although best remembered these days as a 1960s style icon favoured by the fashion conscious 'Mods', the Lambretta motor scooter – together with Piaggio's rival Vespa – had been intended as basic transport for the non-enthusiast masses. Manufactured by the Italian industrial giant Innocenti, the Lambretta gained instant acceptance in the immediate post-war years. Its cleanliness and convenience in particular appealed to those who regarded the true motorcycle with suspicion. Introduced in 1947, the first Lambretta 'A' employed an open frame with pressed-steel front section and tubular rear, in which sat a 125cc two-stroke engine, setting the pattern for all Lambrettas to follow. While the 'A' was relatively crude, the 'B' model (1948-1950) boasted rear suspension, a twist-grip gear change, and larger (8″) wheels. The A's small wheels had not been liked but in its new form the Lambretta gained mass acceptance; by the end of 1950 Innocenti was producing up to 100 per day. Predecessor of the Li and TV series, the LD arrived in 125cc form in 1951 and became available with a 150cc engine three years later. The LD 125's engine produced 4.8bhp, giving the model a top speed of around 45mph. This particular LD125 was the subject of a full restoration about ten years ago, during which time the 125cc engine was rebuilt to 150cc specs. Since the work was done, this lovely scooter has only been ridden 69 miles. It was recently serviced and treated to a new set of tires. This delightful and super stylish scooter runs well and is a blast. Everything works and the condition is holding up well with minimum use since the older and obviously comprehensive restoration. A nice piece of La Dolce Vita. It is currently titled and registered in California.