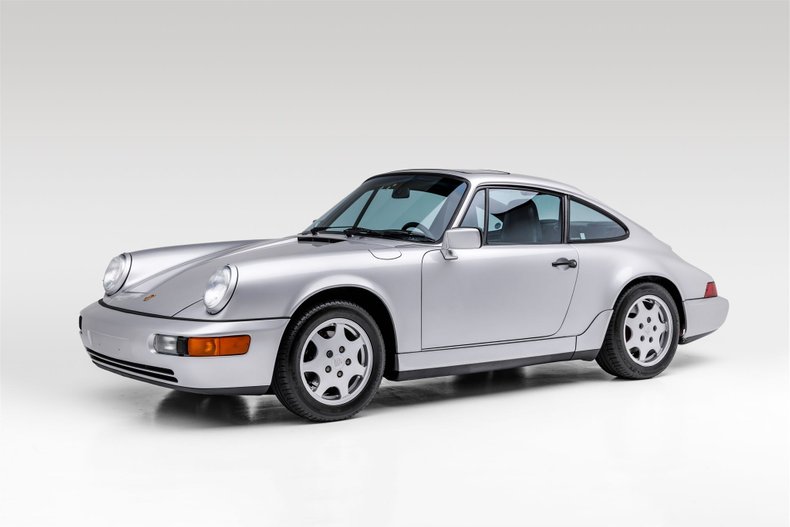 Originally delivered by Porsche Lincolnwood in Lincolnwood, Illinois, the first two owners drove the 911 during the summertime and during the winters it was kept in a climate-controlled garage. The third owner took possession of the 911 in the late 1990s and brought the 911 to Southern California in 2007 to continue his career in the oil industry. During his 7 years of documented ownership, Mr. Gorrell regularly serviced and maintained his Porsche. In 2010, the fourth owner purchased this Carrera in Long Beach, California. He and his wife both fell in love with the C2 and purchased it from the previous owner with 115,763 miles. During their ownership, it was only driven 2,664 miles over 10-years. European Collectibles purchased this Carrera 2 in 2020 and has done a major service including new belts, a distributor belt, an oil and filter change, brakes, new tires, the sunroof serviced, and an AC service.

Incredibly dry and rust-free 964 finished in its factory color combination of Silver Metallic (980) with a black interior. The paintwork is in beautiful condition with perfect gaps and panel fit. The interior is all original with cold air conditioning and an electric sunroof. The undercarriage is also all original with no signs of rust and most of the factory cosmoline (protective rust coating) present across the entire undercarriage. Mechanically powered by a 3.6L flat-six engine producing 247HP with 228lb-ft torque and a max RPM of 6,700. Complete with two keys, owner's manual, collapsible spare tire, toolkit, and records from 1999-2013. A rare opportunity to acquire a 964 Carrera 2 Coupe in a classic color combination.

History
The 964 was considered to be 85% new as compared to its predecessor, the Carrera 3.2. The first 964s available in 1989 were all-wheel-drive equipped "Carrera 4" models; Porsche added the rear-wheel-drive Carrera 2 variant to the range in 1990. Both variants were available as a Coupé, Targa, or Cabriolet. The 964 Carrera was the last generation sold with the traditional removable Targa roof until the 2011 991. A new naturally aspirated engine called the M64 was used for 964 models, with a flat-6 displacement of 3.6 liters. The 964 Porsches are loved by many enthusiasts for their classic look and feel, but modern drivability. Unfortunately, Porsche struggled during the 964 era and not enough examples were produced to meet the demand of collectors today.