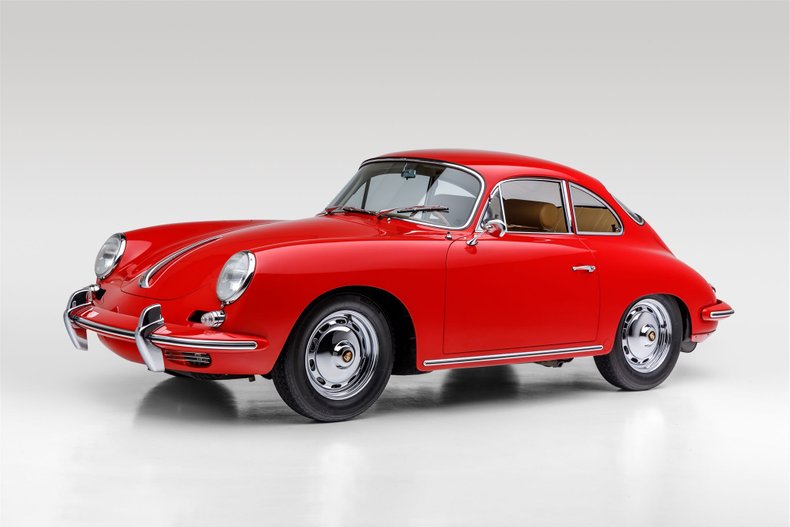 Well-known ownership history from 1987 to present with excellent documentation, this 356B Carrera 2 Coupe chassis no. 124XXX was completed at the Porsche factory on April 11, 1963, and delivered new through AutoHaus-Gramling in Karlsruhe, Germany. The first three owners were all in Europe. The Carrera had migrated to the United States by the 1980s, where it was owned by a Tom Vernen of Knox, Pennsylvania. Mr. Vernen worked with Gerry McCarthy owner of Kam Motor Sports in Waterbury, Connecticut. Later, the Carrera 2 traveled West to Paradise Valley, Arizona, and the past owner enjoyed the C2 from 2008 to 2014. The current owner purchased this spectacular Porsche 356 Carrera 2 Coupe in January of 2015 and has had it in his Los Angeles collection of exquisite European sports cars for the past 6 years.

This outstanding Carrera 2 is documented with the Kardex and the Porsche Certificate of Authenticity, which indicates that the car is presented with overwhelming authenticity, featuring the original color scheme of Signal Red with a Tan leather interior. Also including a VDM wooden Carrera steering wheel, deluxe chrome horn ring, annular disc brakes, AM/FM radio with an antenna and two speakers, armrest on the passenger side, headrests, three-point safety belts, and chrome wheels fitted with Dunlop tires (currently with Vredestein Sprint Classic 165 HR 15 tires).

An extensive cosmetic and mechanical restoration was performed from 2009-2011 during the past ownership. Additionally, the powerful Type 587 4-cam Carrera engine was refreshed by Richardson Restoration & Machine Werks located in Phoenix, Arizona, and has since accrued 7,685 kilometers (less than 5,000 miles). Notably, the engine, chassis, and body panel stampings correspond to Porsche factory documents. The cosmetic finishes are no less impressive, with correct VDO gauges, an elegant wood-rimmed steering wheel, and tan leather upholstery complementing the arresting Signal Red exterior that features the proper Carrera script as well as the unique rear bumper apron with exhaust valances. This well-documented and maintained Carrera 2 is a highly desirable example of one of Porsche's most important vintage road machines. The Porsche is accompanied by a tool kit and jack, in addition to the aforementioned Kardex and COA. It is a wonderfully detailed and highly desirable example of a venerable Stuttgart classic that warrants consideration by any serious Porsche connoisseur.

History
In September 1961, Porsche addressed this perception by introducing an updated version of the Carrera that was exclusively available as a coupe. The original 4-cam motor design was endowed with even more power by enlarging displacement to two liters, and reclassified as the Type 587/1, resulting in the fastest Porsche road car to date. Recognizing that the pure torque might be a handful for inexperienced customers, Porsche outfitted the new Carrera with disc brakes all around, and it was the first Porsche road car to be so equipped.

Introduced for the 1962 model-year as the Carrera 2, the internally coded GS 2000 wore Reutter's twin rear-grille T-6 body style and could have been mistaken for a standard pushrod 356B were it not for the dual exhausts that emerged from a distinctive apron under the rear bumper valance. Approximately 251 examples of the 356B Carrera 2 were made in total. Claiming rarity, unprecedented performance, and identity as the most developed generation of the 356-based Carrera, the Carrera 2 has grown to be one of the most desirable of the vintage Porsche road cars, a veritable cornerstone of the Stuttgart legend.