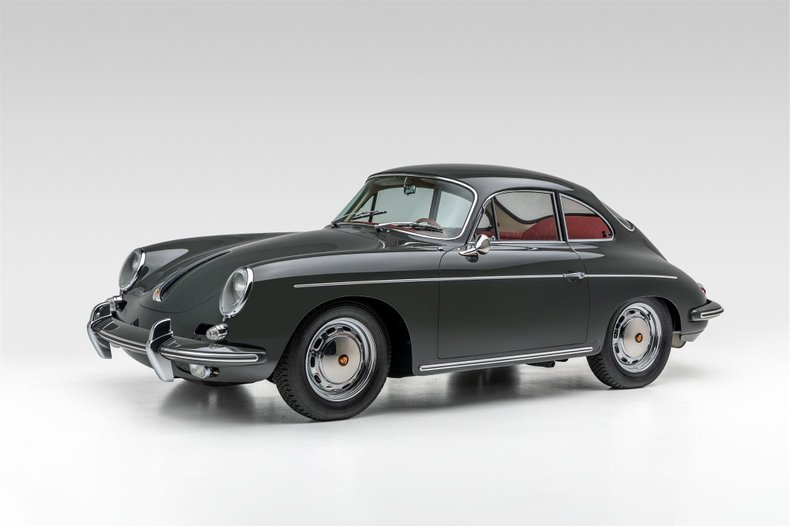 Originally delivered new to Gilles Bagnoud to the Sierre Hotel Bristol in Crans-Montana, Switzerland, and handled by AMAG Porsche in Switzerland. In 1977, the current owner saw a 1963 Porsche 356B Carrera 2000 GS Coupe listed for sale in the Los Angeles Times and purchased it. For the next 40 years, the Carrera 2 was stored in a warehouse in San Diego, California.

In 2017, the Carrera 2 was transported to European Collectibles, Inc. and received a complete nut and bolt restoration from 2018 to 2021. The body was stripped to steel and everything was rebuilt or reconditioned with no expense spared! The 2.0-liter 587/1 4-cam engine and 4-speed 741 transmission were both completely rebuilt by local 356 specialists. All matching numbers per Porsche Kardex. The Carrera 2 has been fitted with 356 C-style four-wheel disc brakes for enhanced performance. After 3 years of hard work, a phenomenal 356 C2 is back on the road!

One of 251 2.0-liter 356B Carrera Coupes produced, finished in its original color combination, Slate Grey with a Red leather interior and Grey German square weave carpeting. Complete with Carrera tool kit, Jack, Kardex, owner's manual, and records. Options include a gas heater, body molding, VDM Carrera wood steering wheel with deluxe horn ring, chrome rims, and Hella 128 fog lights. If you are looking for one of the best Carrera 2000GS's in the country in astonishing condition, look no further; this 356 Carrera 2 has it all.

History of the 356 Carrera
After a considerable absence of a Carrera model in the 356-model lineup, Porsche finally made another 4-cam version with the introduction of a 2.0-liter engine. This Carrera trailed a series of impressive 1.6-liter cars known as the 1600GS.

As with the earlier versions, the Carrera was offered both in a Carrera GS Deluxe version for the road and the Carrera GT for the racetrack. Unlike these earlier models, the new car benefited from the 2.0-liter engine introduced as the Carrera 2 in September 1962.

The 2.0-Liter Carrera used a variant of the Type 547 engine with a larger bore and stroke, having 1966cc. The larger cylinder wall meant that the block had to be both taller and wider and the type was changed to 587. The new engine offered much more increased low-end torque making it suitable for everyday driving.

The first Type 578 engines were used at the Targa Florio in 1961 where the cars nearly won their class. However, testing on several red coupes to and from race events finalized the specification of the road-going Carrera de Luxe.