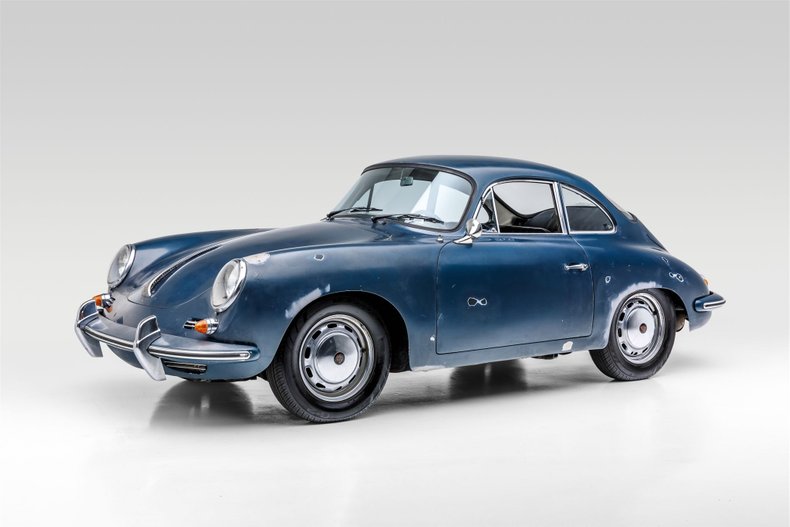 Originally delivered new to G. Bettiaelli from Grenchen, and handled by AMAG Porsche in Switzerland. Special ordered color, Silver Metallic, with a Red interior and Red corduroy inserts (A/C). According to the current owner, his Uncle purchased this 356 while he was in the military service in Switzerland in the late 1960s. The 356 was brought back to Southern California where it has been for the past 50 plus years. The car was gifted to the nephew after the passing of the uncle.

According to the Kardex from Porsche, this 356C Coupe is all matching driveline, original 1600cc engine (75HP), original 4-speed manual (741) transmission, and four-wheel disc brakes. It is in need of a cosmetic restoration, but it is fully drivable in its current condition. The floor pans are in good condition, but both jack spurs are in need of replacement and the front battery box floor pan has been patched under the battery area. Excellent mechanical condition and ready to either enjoy or undergo a cosmetic restoration!

History
The last revision of the 356 was the 356C introduced for the 1964 model year. It featured disc brakes all round, as well as an option for the most powerful pushrod engine Porsche, had ever produced, the 95 horse power "SC". 356 production peaked at 14,151 cars in 1964, the year that its successor, the new 911, was introduced to the US market (it was introduced slightly earlier in Europe). The company continued to sell the 356C in North America through 1965 as demand for the model remained quite strong in the early days of the heavier and more "civilized" 911. The last ten 356's (cabriolets) were assembled for the Dutch police force in March 1966 as 1965 models.