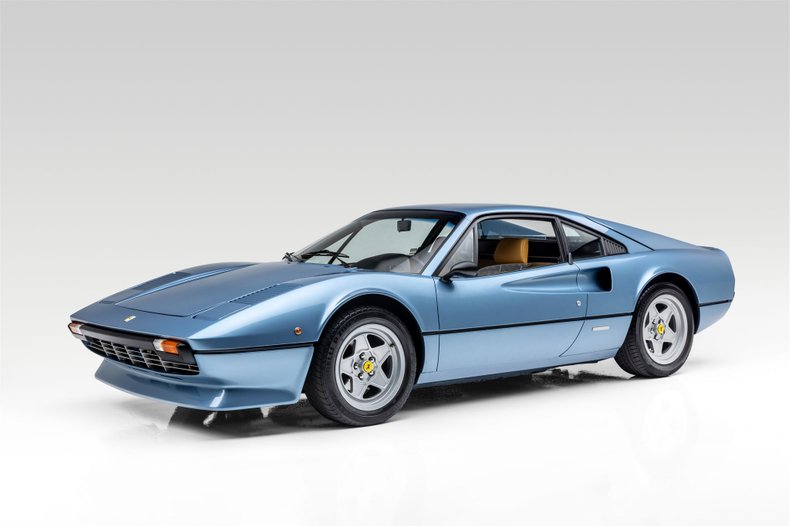 Introduced as a replacement for the V6-powered 246 Dino, the 308 GT4 and GTB received an all-new, DOHC V8 engine, with a displacement of just under three liters. With the power plant placed transversely above the rear axle, these cars have proven to be agile handlers, and their relative affordability makes them a great entree to the world of Ferrari ownership. Many V8 models have come and gone over the past four decades, but the 308 and 328 models of the 1970s and 1980s remain perhaps the most iconic of them all.

Unveiled at the 1975 Paris Auto Salon, the all-new 308GTB marked a major change of direction at Ferrari and opened up a whole new market for the Italian manufacturer. Penned by Pininfarina, the compact, clean design was to stand the test of time, and was deservedly placed as number five on Sports Car International's Top Sports Cars of the 1970's list. A notable aspect of the early 308GTB was that, although still built by Scaglietti, the car's bodywork was entirely made of glass-reinforced plastic, allowing for a very light weight of just over 2,300 lbs. These most desirable of the early fiberglass cars also featured dry-sump lubrication derived from Ferrari's racing experience. Just 712 of these first series, lightweight 308GTB's were produced until a more traditional steel body construction was adopted.

The example presented here, Chassis 20839, is an ultra-desirable European dry sump model with a Fiberglass body. This car was built in February 1977 and fitted with engine number 610 and gearbox number 630, both of which remain in the car today. Chassis 20839 has spent the majority of its life in Switzerland but moved to Denmark in 2007 and then USA in 2016. Upon entry to California in 2016 from Denmark, this car was beautifully repainted from red back to its original color, Azzurro Metallizato. Once the paintwork was completed, new carpets were installed, and some additional interior tidying was done. On the mechanical side, the car was completely gone thorough, including all new fluids, belts, various fuse-related electrical repairs and a rebuild of the AC system. Once the services were completed, the carburetors were torn down, cleaned and rebuilt. Further tuning included a full disassembly of the distributor and replacement of both sets of points. Once running beautifully, road testing began and some drag in the rear differential was noted at low speed, so it was disassembled, cleaned and reassembled with new parts and CV boots as needed. The mechanical reconditioning totaled $28,812.20. Shortly after this work was performed, the car was sold to a well-known Ferrari collector in Wisconsin who added 1,000 kilometers before sending it back to European Collectibles four years later. We are pleased to offer this well-sorted and desirable Ferrari that is the ultimate specification for a 308 with its European deep chin spoiler, snappy dry-sump engine and lightweight/durable Fiberglass bodywork.

Please note: This car is currently fitted with 16" wheels which accommodate much better tires than are available in 14" sizes. Should any perspective buyer prefer period-correct 14" wheels, we are happy to install them with the new tires of your choice.