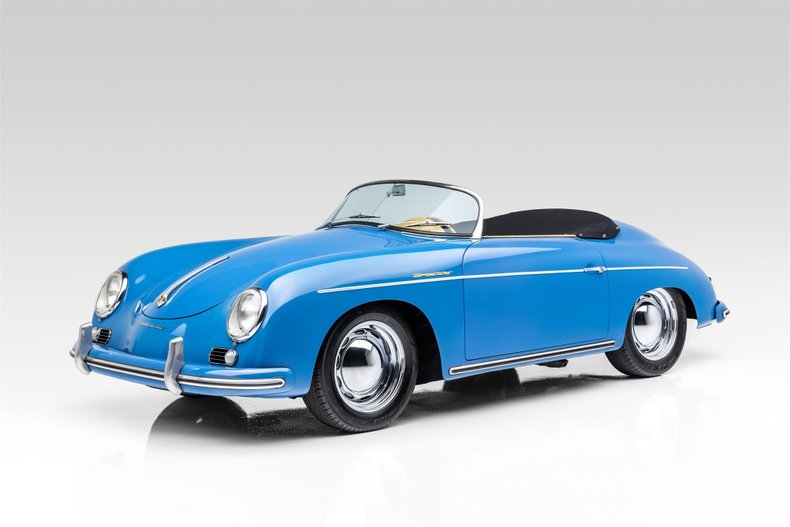 VIN 82129 is the 129th Speedster built out of 1,156 Speedsters for the 1956-year model. According to the Certificate of Authenticity, the exterior and interior color was not recorded. Finished in a beautiful color combination Speedster Blue with a Tan interior. This is a straight, solid, and rust-free 356 with very good gaps and panel fit. The undercarriage and suspension are nicely detailed.

European Collectibles sold this Speedster back in 2017 to the current owner who has loved it. This Speedster has been driven and enjoyed weekly, but the time has come to sell the Speedster and purchase another Porsche (garage space is the problem). The paint and interior are in wonderful condition. The Tan interior is very nice with blue piping on the front seats and Tan German square weave carpets, a black soft-top, side curtains, and a Black boot cover. This Speedster is a great example that is ready to drive anywhere!

Mechanically the engine has been rebuilt along with the brakes. The 644 manual 4-speed transmission shifts perfectly, the steering is tight and the four-wheel drum brakes have been rebuilt. This Speedster drives like a dream and connects you to the road like no other car. It is very fun to drive with plenty of power, smooth shifting transmission, and great braking. If you have been after a fun Speedster to drive at a reasonable price look no further! Complete with the Porsche Certificate of Authenticity, owner's manual, spare tire, and jack.

History
It's hard to believe, but Porsche design and the Germans, in general, were able to reboot and go from thinking about Tiger tanks to sports cars in the span of just three years. In 1948, the first Porsche 356 emerged from a converted sawmill in Gmund, Austria (the Allied occupation forces were the new residents of Porsche's Stuttgart, Germany offices).

By 1950, a much-improved version of the Porsche 356 built-in Zuffenhausen, Germany was being sold in America. Early U.S. importer Max Hoffman was responsible for the most-iconic 356 body style, the Speedster, which was a rather stripped down and basic $2,995 version of the car with racing-style bucket seats, removable side curtains instead of roll-up windows, and a low windshield that the weekend racers who favored the model could easily remove.