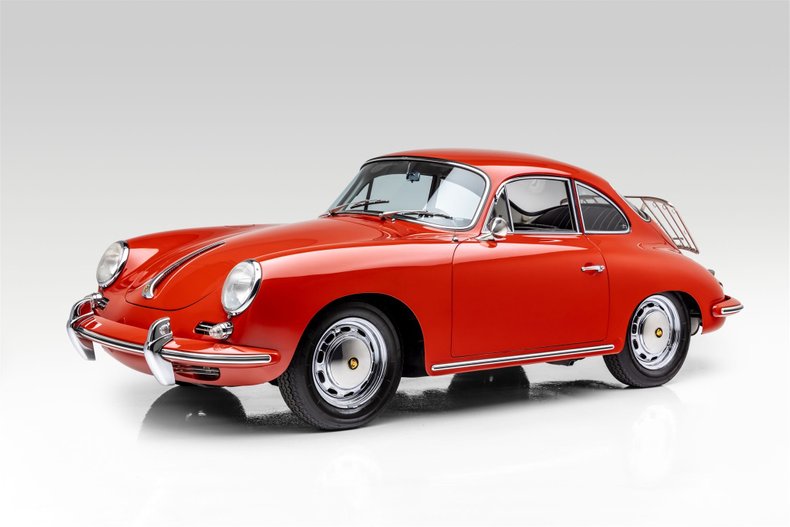 Black plate California car finished in the original color combination Signal Red (6407) with Black leatherette interior. The paintwork is stunning and is in excellent condition along with all the brightwork and original glass. The panel fit is perfect with excellent gaps. The interior is superb with original VDO instrumentation and Blaupunkt AM/FM radio. The undercarriage is solid, rust-free, and nicely detailed.

According to the documentation, the earliest history begins in 1986 when it was purchased in Sand City, California. The new owner performed a full restoration on this 356 in the early 1990s. The body was stripped to bare metal, primed, and repainted in the original color Signal Red. The engine was taken down to the block, magnafluxed, inspected, and reassembled per the Maestro's (Harry Pellow) specifications. By 1996, the restoration was finished, but due to personal reasons, the owner did not have the time to enjoy it. In late 1996, the 356 was consigned with Lexus Monterey Peninsula in Seaside, California where it was sold on July 26, 1996, with 75,764 miles. The owner continued to regularly service and maintain the 356 until 2015. In 2016, the current owner purchased the 356 and commissioned Auto Specialists LLC in Canyon Country, California to R&R the engine and transmission. The transmission was sent to Vic Skirmants to be rebuilt. Auto Specialist did the following work: replaced the flywheel seal, install a muffler heat shield, reset rear wheel camber, replace rear bump stops, replaced the torsion bar bushings, replaced the shifter bushings, adjusted the shifter pattern, bleed the brake system complete, oil change and a tune on the engine. Five Vredestein 165 15 tires were installed along with a new battery.

Mechanically powered by its matching driveline; 1600cc flat-four 356C engine (producing 75 horsepower) with a 4-speed manual (741) transmission, which has no issues and performs flawlessly. Complete with Certificate of Authenticity, over 35 years of documentation, owner's manual, jack, and spare tire. An excellent opportunity to acquire a beautiful 356C Coupe restored to very high standards.

History
The 356 was a lightweight and nimble-handling rear-engine rear-wheel-drive 2-door sports car available in hardtop coupé and open configurations. Engineering innovations continued during the years of manufacture, contributing to its motorsport's success and popularity. However, when the T6 got disc brakes in 1964, with no other visible alterations, they called it the model C, or the SC when it had the optional extra powerful engine. The last revision of the 356 was the 356C introduced for the 1964 model year. It featured disc brakes all around, as well as an option for the most powerful pushrod engine Porsche, had ever produced; the 95-horsepower "SC"