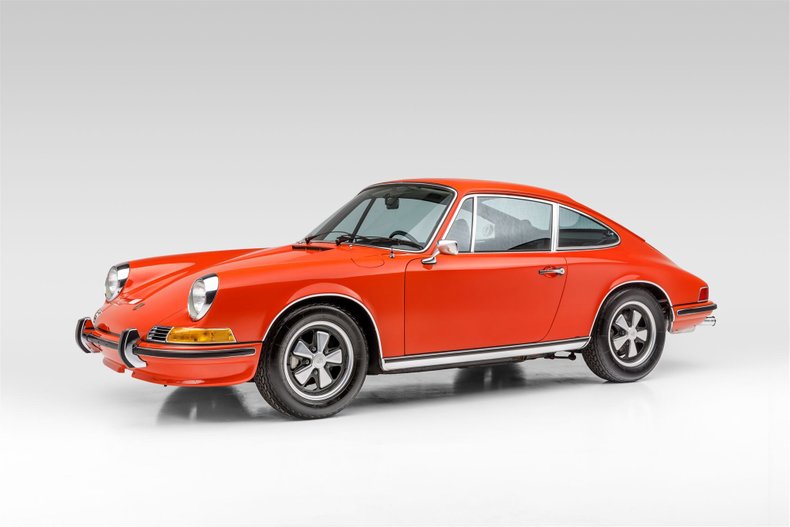 On June 16, 1972, Henry Snyder took delivery of this 1972 Porsche 911T Coupe at the Porsche factory in Stuttgart, Germany, ordered in Tangerine with Black leatherette interior through the “Tourist Delivery Program.” Options included: USA equipment LHD, Koni shocks, left front seat raised, stainless steel muffler skirt, chrome strip around fenders, tinted glass, retractable antenna, S front spoiler, collision bar for the rear bumper, and a rare electric sliding sunroof. Mr. Snyder drove this 911 all over Europe over a 5-week period. On July 31, 1972, the 911 was shipped from Emden, Germany to Chicago, Illinois. Over three decades, Mr. Snyder drove this 911 approximately 70,000 miles which are all documented in the service receipts. In 2007 European Collectibles purchased this 911T and resold it to the second owner who has cherished it over the past 13 years with 8,000 miles of pure enjoyment. In June of 2020, European Collectibles took this amazing 911T back in on trade.

After 48 years it was time for EC to do a reseal. The engine and transmission were removed, and all the original hardware came apart for the first time in almost five decades. The engine and transmission were cleaned and degreased. The transmission was disassembled and inspected with any worn items being replaced, including a retainer plate and bearings. Following this, the transmission was reassembled with all new seals and gaskets. The engine was disassembled down to the long block, all the gaskets and seals were replaced on the following; cam seals, thermostat O-rings, breather gaskets, intermediate shaft gaskets, front and rear crank seals, timing chain box covers, and valve covers. The Carrera oil chain tension upgrade has been installed, along with a valve adjustment, new spark plugs, intake gaskets, and new oil return lines have also been installed. The MFI pump was resealed as well and a new clutch, pressure plate, and throw-out bearing were put in.

It was then sold to the third owner in late 2020 who has an incredible collection of Porsches and has enjoyed it thoroughly. However, with too many vehicles to drive he has decided to scale down his collection.

This is a preservation class 911 able to be shown at the Porsche Parade, Pebble Beach Concours d'Elegance, or in any preservation class event. Amazing overall condition and a super straight body with a perfect fit and finish. The undercarriage is 100% original, solid, and rust-free with no accident damage. The paintwork is stunning and is 80% original. The interior is like new and is ALL original, with a perfect dash, speaker grill, door pockets, carpets, seats, and headliner; it is very rare to find such an original example. Exceptional paperwork and history include the original Tourist Delivery Order document, original shipping documents, service receipts, and ALL the original books. This 911 is a time warp and is a pleasure to drive!

In 1972, a tremendous effort was made to improve the handling of the 911. Due to the 911's unusual engine placement (rear-mounted, with most of the vehicle's weight concentrated over the rear axle), early 911's were prone to oversteer when driven at the limit and could easily spin in the hands of an inexperienced driver. In an attempt to remedy this, Porsche relocated the oil tank from its position behind the right rear wheel to in front of it. This had the effect of moving the weight of almost 8.5 L (9 US quarts) of oil from outside the wheelbase to inside, improving weight distribution and thus, handling. To facilitate filling of the oil tank, Porsche installed an oil filler door (much like the fuel filler door on the left front fender) on the right rear quarter panel. Unfortunately, this unique design was scrapped after only one year, some say because inattentive gas station attendants were putting gas in the oil tank. The oil tank was subsequently relocated to its original position for the model year 1973 and remained there until it was relocated within the wheelbase for the 964 models.