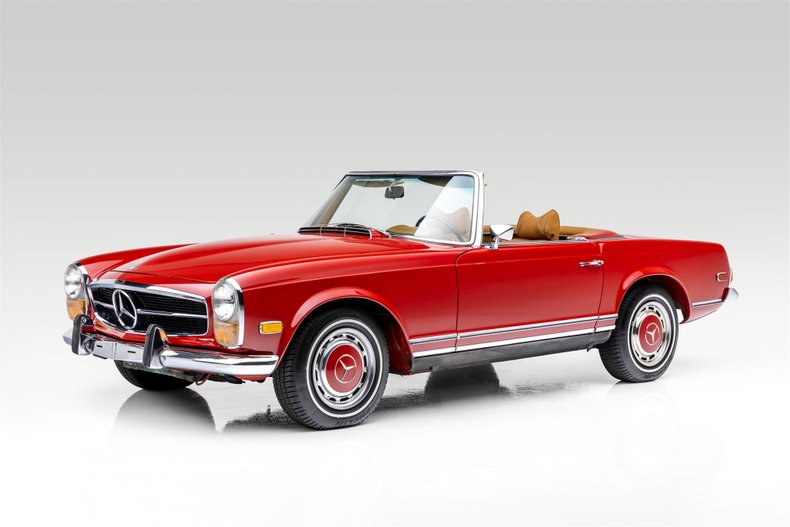 Two (2) owners, Southern California car, the first owner was from Costa Mesa, California and purchased the 280SL on April 5, 1971, for $7,909. He enjoyed the Mercedes for 10 years, routinely servicing the Roadster, and an average of 9,000 miles on it per year. The second owner who was a doctor lived in Newport Beach, California, and purchased the 280SL on September 22, 1981, from Jim Slemons Imports Mercedes Benz in Newport for $15,500. All the service work had been done at the dealer and it had a new convertible top, new brakes, and new tires.

Beautiful overall condition finished in Signal Red (color code DB-568) with an excellent Tan German interior. Options include automatic transmission, air conditioning, and two (2) tops. Forty (40) years of documentation with detailed notes of all the work that has been performed over the years. The 1971 Mercedes 280SL was a very low production of only 830 cars produced worldwide.

Mechanically it has a 2.8-liter (2778cc) inline 6 cylinder with fuel injection, producing 170 horsepower @ 5,750 RPMs and 180 lb-ft of torque @ 4,500 RPMs with a 4-speed automatic transmission, four-wheel disc brakes with power assist, and a 21-gallon fuel tank. Serviced by Jim Slemons Imports Mercedes Benz, Mercedes Benz Service Center, and Maurice's Mercedes Benz over the years. A wonderful classic Pagoda to drive and enjoy. Rare opportunity to purchase a rust-free California 280SL that has been well maintained and cared for over the years.

Mercedes-Benz introduced the 280SL less than a year after the 250SL arrived on the scene, and closed out the “pagoda” SL line in 1971 after nearly 23,885 were built worldwide from 1967-1971 but only 12,927 were made for the US market over half of the production. The 280 was very similar, to its predecessor, using clean, elegant lines, intelligent placement of the wheels in proportion to the rest of the design, and a tall, "pagoda" removable hardtop that allowed for ease of ingress and egress.

Like the other W113 cars, the 280 utilized a monocoque chassis, with front suspension courtesy of coils and wishbones, while the rear incorporated a single-pivot swing axle and transverse springs set up to compensate for camber. Four-wheel discs provided braking power.

The engine was a 2.8-liter, overhead-cam, inline-6. Bosch fuel injection was incorporated as well, and horsepower on the sport tourer was rated at 180 – a fair bit more than the 230 and 250 had access to. Torque was also higher at 177 ft-lb. A 4-speed manual transmission was standard, though a new 4-speed automatic transmission was optional, as was a ZF 5-speed manual.

Cabin refinement was high, with acres of leather, plush, supportive seats, big, readable gauges, Blaupunkt radios, and quality of craftsmanship throughout, including the soft top, which disappeared easily and unobtrusively when not in use. New safety features included an energy-absorbing steering column and three-point seatbelts, while side marker lights are the biggest external visual difference between the 250 and 280.

By the time the 280SL gave way to the next generation SL, designated the R107, it had firmly established itself as one of the finest cars to come from the Stuttgart firm. With timeless, graceful styling, spirited performance and handling, and build quality and reliability second to none, the SL series of cars built from 1963 to 1971 are solid collectibles with plenty to offer.