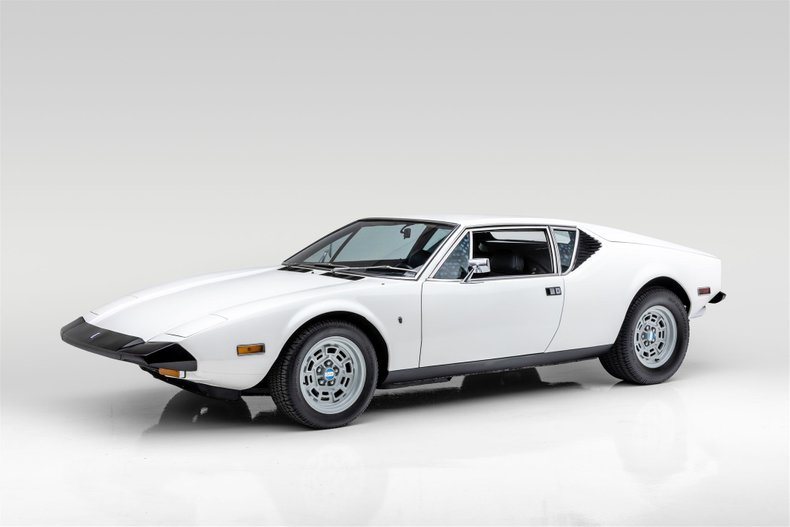 One (1) owner, Southern California car, #5468 was sold by Lincoln-Mercury Johnson & Son in Costa Mesa, California on November 23, 1973, with only 50 miles for $11,425.05. Over the first four years, the Pantera was serviced by Lincoln-Mercury dealerships across Southern California. By 1978, a Pantera Specialists in Santa Ana, California became the only service shop the owner would use. The owner drove the Pantera as a daily driver during the first 10 years, accruing 97,000 miles, before driving it sparingly over the last 38 years as a weekend classic. This Pantera was meticulously maintained and never missed the opportunity for routine maintenance.

Originally finished in White (V204) with a Black leather interior with excellent gaps and panel fit. The exterior trim is in great condition with its original single slot Campagnolo wheels. The upholstery is in very good condition with the original Veglia Borletti instrumentation.

Mechanically powered by the 351 Cleveland V8 engine (266hp) that performs flawlessly paired to its gated 5-speed ZF manual transmission. A unique opportunity to acquire an extremely well-documented, one (1) owner Pantera with 48 years of service history that has been well-taken care of throughout its life.

History
During the four-year run of the De Tomaso Pantera, from 1971-1974, only 5,629 examples were sold and distributed by Lincoln-Mercury and more than 80% are still on the road today. The De Tomaso Pantera was the first attempt at blending Italian body-styling with American muscle. Designed by the Italian design firm Ghia by an American-born designer, Tom Tjaarda. The Ford 351 Cleveland V8 engine in the De Tomaso was chosen from earlier American muscle cars and selected for its higher-revving capability. This gave the Pantera the ability to compete with the likes of Ferrari and Lamborghini and at a retail price of $10,000, it made the Pantera the most affordable Italian supercar.