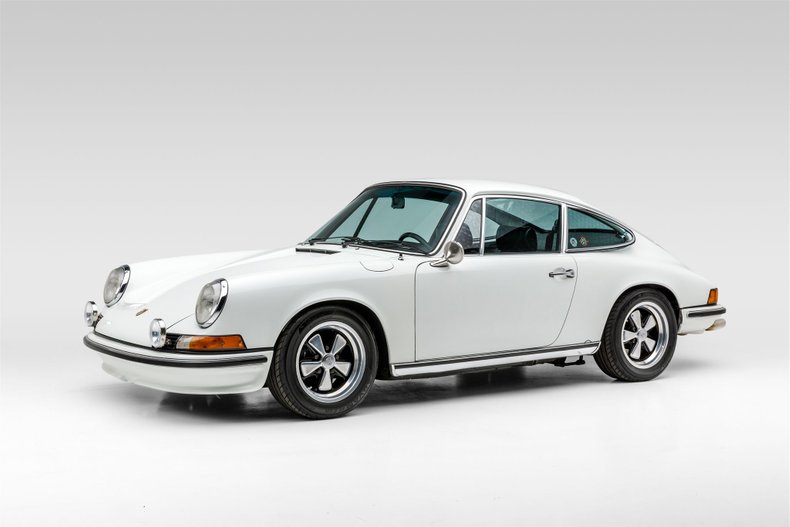 One owner for the past 21 years, a Southern California car purchased on June 27th, 1999 that is a solid and rust-free example. The goal was to build a performance 911. The restoration started in the early 2000s by Galen Beiker of Werks II Motorsports in Burbank, California.

Mechanically, a 3.0-liter was sourced and built to a 3.2-liter short-stroke engine based on an SC case #64D2508 (type 930/16) which was bored, balanced, and blueprinted. Fully documented rebuild with new Mahle 3.2L pistons and cylinders, ported and polished cylinder heads, “S” grind on the camshafts, new old stock Webbers 46 IDA carburetors, Carrera chain tensioner update, and hard oil lines with an “S” front oil cooler are just a few of the many mechanical upgrades.

Suspension included four Boxster mono-block brake calipers that were upgraded along with Bilstein sport shocks on the front and rear with a carbon fiber strut tower brace. A newer 915 (5-speed) transmission was upgraded to handle the additional horsepower with Turbo synchromesh, a Quaife limited-slip differential, and a Wevo short shifter made by Windrush.

All gauges were restored by North Hollywood Speedometer as well as the lightweight interior being done by Segona Upholstery in Burbank, California. Along with a correct RS steering wheel and horn button, a Recaro passenger seat and an RS-style driver's seat was installed.

It is a California car; both the body & undercarriage are extremely dry & straight with no signs of damage or rust. Finished in Grand Prix White with a lovely Black lightweight interior. All of the gauges and clock have been restored by North Hollywood Speedometer. It is truly in exceptional condition!

The best part is not how good she looks but the way this 911 drives. It is pure Porsche. There is nothing like the way these long hood 911s handle. They are very nimble, and you feel the road with every turn. The short-stroke 3.2-liter motor also has a very free rev which is like no other 911. This engine runs absolutely perfect and the 915 transmission shifts with precision and is very smooth. The steering is light and responsive. The four-wheel oversized disc brakes stop the car straight and has been completely rebuilt along with the suspension. For over the past 20 years, the owner has kept this 911 in optimal condition. An ideal 911 for any vintage touring event. Rare opportunity to find an exceptionally well-built 911 that has been restored and sorted.

Regardless of the budget, Galen and the team at Werks II Motorsport can provide a comprehensive tuning package for street or track-specific applications. Additionally, Werks II is a primary warehouse distributor for many of the highest quality motorsport manufacturers. Werks II supplies racing equipment for professional teams, club racers, and driving enthusiasts alike.