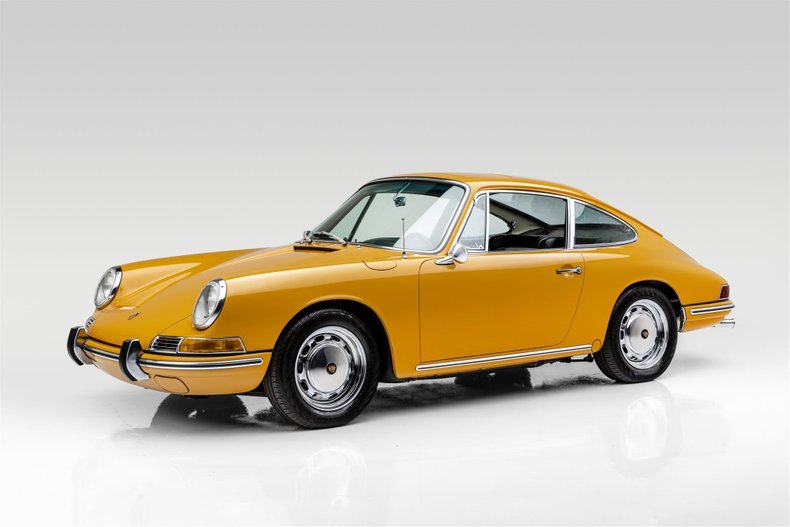 Previously owned by one of the original founders of the 912 Registry, we present, Jeff Trask's 1967 Porsche 912, finished in its factory color combination Bahama Yellow with Black interior and houndstooth Sport Seats. Equipped from the factory with a 5-gauge dash, Blaupunkt AM/FM Frankfurt radio, electric sunroof, tinted glass all around, raised steering wheel hub, chrome ventilated wheels, loudspeaker, antenna, and the optional 5-speed gearbox.

The paintwork was completed by European Collectibles in 2019 for the current owner who followed Jeff's dream to go back to the original color. The Bahama Yellow paint is in immaculate condition with perfect gaps and panel fit. The upholstery is stunning and includes sport seats with houndstooth inserts, the last year of the black with green VDO gauges, brushed aluminum dash, and the Momo Prototipo steering wheel.

According to Jeff, the 912 was a California car and was moved to Massachusetts where it was painted a light shade of Slate Gray. Jack Conklin purchased the 912 with the help of Jeff from an eBay ad, which stated the car as being a matching numbers example with a factory-ordered sunroof and 50,725 original miles. On January 12, 2007, Jack Conklin took delivery of the 912 in Southern California and it was serviced by Benton Performance.

Jeff purchased the 912 in 2013 and used it as his daily driver giving this Porsche much love and care over the years. This 912 has seen its fair share of captivating scenery as it has been driven from California through the Texas Hill Climb several times, to The Bull Session in Washington state, to the Emory Campout in Oregon frequently, to multiple Monterey car weeks, and many West Coast Holiday events over the years. Through these events, this 912 has traveled over 40,000 miles with the help of John at Benton Performance in Anaheim, California doing routine servicing before each event.

Mechanically powered by the matching numbers driveline: 1600cc flat-four engine (with 120hp) and paired with a 902/01 manual 5-speed transmission and four-wheel disc brakes. Incredibly rare opportunity to acquire an early 5-gauge 912 with a factory sunroof finished in an extremely desirable color combination.

History of the 1967 Porsche 912
In 1966, Porsche made the change to make all dashboards matte black and feature a decorative band of brushed aluminum. The bumper guards, which had been chrome through 1966, now incorporated a rubber protective strip. Inside the car, a 5-gauge dashboard became standard in 1967, with the additional gauges being a clock and an ambient temperature gauge. On rare sunroof optioned cars, drainage vents were moved from just above the upper corners of the window to the internal drainage channel of the rear decklid. Roughly 2-3% of all factory Porsches made in 1967 were special ordered with the power sunroof option at a cost of $450 extra.

History of the 912 Registry
In the Spring of 2002, Jeff Trask & John Benton from Southern California, and Craig Norton of Northern California organized the first West Coast 912 Rendezvous, an event that has taken place annually every year since. During this event, several owners discussed turning the 912 Registry into an incorporated club that could offer additional benefits to 912 enthusiasts. Top priorities included a newsletter/magazine and grille badge. Jeff Whitney, a 912 owner, and graphic designer, soon became the first Editor of the new 912 Registry Magazine, and he created the 912 Registry grille badge, which many 912 owners consider one of the finest car club badges in existence. At the September 2002 Ventura German Auto Fest, 912 owners met with organizers of other Porsche clubs to learn from their experiences and selected a panel of 912 owners with varying experiences and backgrounds to consider board membership. In November of 2002, the initial panel of volunteer board members met at Jeff Trask's home to iron out by-laws and practical details, and then it was Jeff Trask who did the lion's share of the groundwork necessary so that the non-profit organization could be formed.