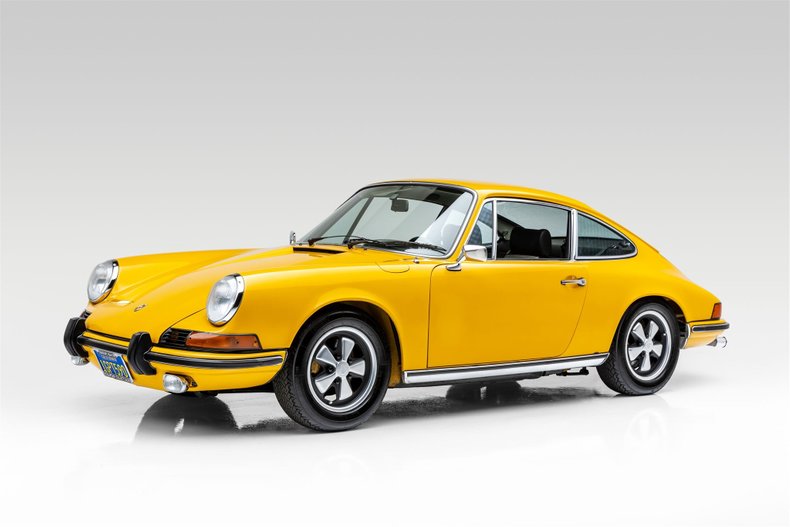 California blue plate, three (3) owners, 911T finished in its original color combination of Signal Yellow (52) with Black (11) Leatherette interior and houndstooth inserts. The options from the factory include US Equipment, Forged Alloy Wheels, Comfort Equipment, Manual Antenna, Loudspeaker, Tinted Glass All Around, and Pirelli Tires. The Signal Yellow paintwork is in excellent condition with perfect gaps and panel fit. The brightwork and rubber seals are also in exceptional condition. The upholstery is in incredible shape with houndstooth inserts on the front seats, a Momo steering wheel, VDO instrumentation, and a Becker Europa AM/FM radio with Bluetooth technology. The original factory undercoating remains underneath the 911, in the engine compartment, and in the front trunk area.

This 911 was reportedly stored for approximately 25 years in a garage prior to undergoing an exterior cosmetic restoration. It was stated that the 911 had always lived in California and had 74k miles when it was brought out of storage in Pleasanton, California. The body was then stripped to bare metal and repainted in the original color, Signal Yellow. The undercarriage, front trunk area, and engine compartment were found to be rust-free and in great shape, so they were left untouched. Work Performed over 2016-2017 included: new Bilstein shocks all around, and 4-wheel alignment. In May of 2018, the engine was completely rebuilt at 92,302 miles which included new JE pistons and cylinders, main bearings, rod bearings, rod bushings, intermediate shaft bearings, timing chain, timing chain rail, engine gasket set, and rebuilt cylinder heads. The crank, rods, and pistons were balanced and blueprinted. The pressure plate and pulley were magnafluxed, and the Carrera chain tensioner upgrade was installed. The forged alloy wheels were professionally refinished and new Pirelli CN36 tires have been installed. A service and oil change was recently performed and this 911 is ready to enjoy!

Mechanically, power by its matching 2.4-liter flat-six engine paired with a 5-speed manual transmission and four-wheel disc brakes. Complete with Certificate of Authenticity, tool kit, jack, and spare tire. An excellent opportunity to acquire the last year of the early long hood's finished in an excellent color combination.

With the power and torque increases, the 2.4 L cars also got a newer, stronger transmission, identified by its Porsche type number 915. Derived from the transmission in the Porsche 908 race car, the 915 did away with the 901/911 transmission's "dog-leg" style first gear arrangement, opting for a traditional H pattern with first gear up to the left, second gear underneath first, etc. Some say this was because the dog-leg shift to second gear was inconvenient for city driving, others say it was due to Porsche's desire to put 5th gear outside the main transmission housing where it could easily be changed for different races.