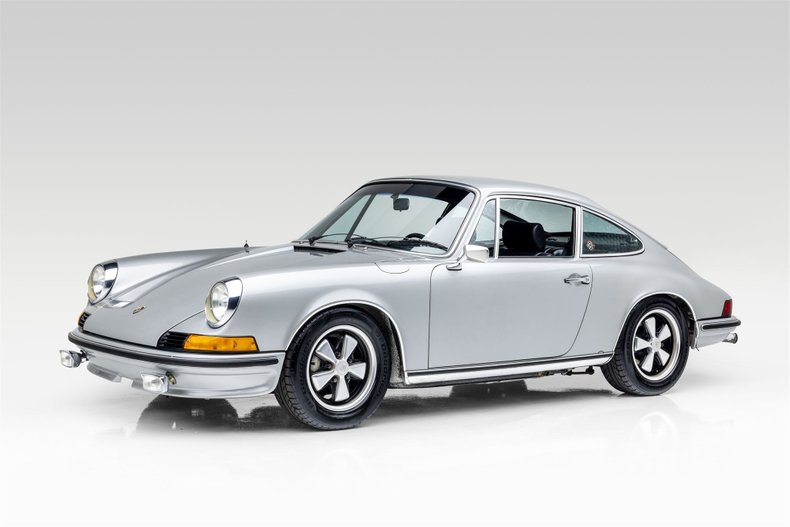 California car for the past 29 years, three (3) owners, finished in its factory color combination of Silver Metallic (8080) with Black leatherette interior, very original and in excellent condition. Due to light usage and excellent care, the nearly 28-year-old paintwork retains a brilliant shine with excellent gaps and panel fit. The upholstery is in excellent overall condition with new German carpets.

Equipped with factory sports seats upholstered in Connolly leather, VDO instrumentation, a Blaupunkt Boston blue dot AM/FM radio, and a factory-installed air condition unit. The undercarriage is all original with no signs of rust or accident damage. The heat exchangers and muffler have been recently ceramic coated. New BF Goodrich Radial T/A 205 60 R15 have also been recently installed.

Originally delivered new to a physician, Dr. Hugh Bass, by Generis Porsche Audi, Inc. in Albuquerque, New Mexico. According to the Certificate of Authenticity options from the factory include USA Version, Koni shock absorbers, Sport Seats left and right, Chrome strips along with the fender cutouts, and tinted glass all around. After 12 years of ownership, at approximately 72,500 miles, the 911S was purchased by the second owner, Mr. Hume, who was an editor of the Albuquerque Journal. Mr. Hume reportedly had the engine overhauled in 1985, at 73k miles, where the engine received new rings, valves, timing chains, upgraded Carrera tensioners, and upgraded valve covers. A few years later, in 1992, the third and current owner purchased the vehicle and drove it to his home in Manhattan Beach, California. On May 5, 1993, the body was stripped to steel and painted using 2 Stage Glasurit Silver Metallic paint. The work was performed by Jerry Cain and new rubber, new headliner, and new trim was installed. On October 22, 1994, at 108,426 miles, Callas Rennsport in Torrance, California was commissioned to fully rebuild the transmission, replace the clutch assembly, and repack CV joints, which totaled $4,244.95. Routine maintenance and services have been performed by Edelweiss or Callas Rennsport which are both reputable shops in Torrance, California. To improve the stance and performance the 911S was lowered, aligned, and corner balanced by Edelweiss on August 8, 2001. Most recently, on June 30, 2021, at 132,326 miles, Arredondo Motorsports performed a full engine out rebuild, which totaled $24,862.24.

History
Few cars made as permanent a mark in the automobile history in both engineering and design as the Porsche 911, and the 1973 2.4-liter production year is widely considered Porsche's best vintage 911. Today, the early model years (1965 to 1973) are considered highly collectible, offering the purest forms of an iconic sports car. Early 911's embody a combination that is rare among collector cars today. They have unparalleled performance, drivability, and usability, especially when compared with other cars of this same vintage.

All early 911's have appreciated tremendously in recent years, with good solid cars seeing significant increases in value. The late cars (1972 and 1973), fitted with 2.4 Liter engines, are very desirable and are generally regarded to be the ultimate development of the original long hood 911. The 911 S was the top-of-the-line of the 911 range (other than the 73 Carrera RS) featuring the sportiest equipment and the most powerful engine.