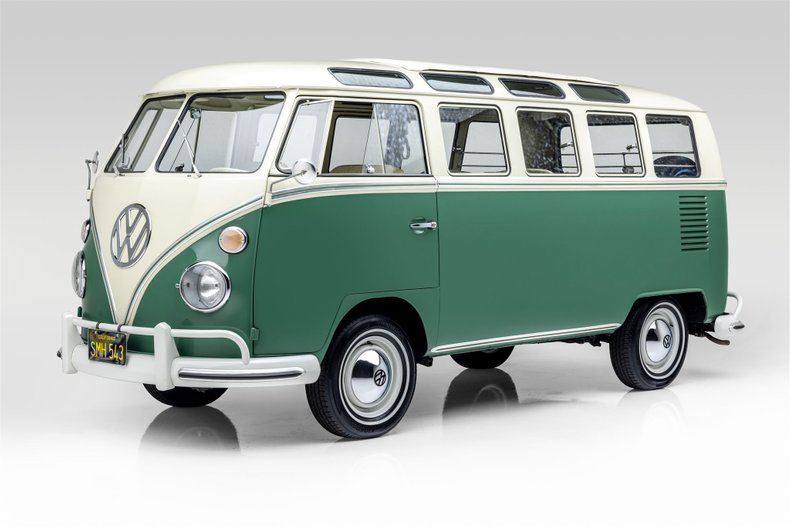 One owner for the past 34 years, factory 21-window walkthrough, finished in its factory color combination of Velvet Green (L512) and Pearl White (L87) with Mesh Platinum (83) upholstery. Paintwork is in excellent condition with deluxe U.S. bumpers, trim, and an original sliding sunroof. The interior is in exceptional condition and is finished in its original specifications using the correct Silver Beige (036) and Mesh Platinum (83) material. The two-spoke steering wheel is complemented by a gold Wolfsburg-crest horn button and an 80-mph VDO speedometer. Additional instrumentation includes a VDO fuel-level gauge, and a VDO/Kienzle analog clock converted to an accurate quartz movement by North Hollywood Speedometer, which is mounted on the right side of the dash. The 14” steel wheels are powder coated in Silver White with original VW chrome hubcaps fitted with five new 185 75 R14 Hankook whitewall tires including the spare. The body is very straight with no indications of accident damage or rust. Power is provided by an upgraded 1766cc flat-four engine paired with a manual 4-speed transmission and freshly rebuilt four-wheel hydraulic drum braking system that stops the bus perfectly.

The earliest known history begins in 1987 where the current owner (then a USAF Captain at Wright Patterson AFB) reportedly purchased the Microbus from a USAF Colonel who worked at the Pentagon. The current owner, an Aerospace Systems Engineer, was very excited to own his very first classic car. In search of acquiring more knowledge of the early history of his bus, he wrote a letter to Volkswagen AG in Wolfsburg, Germany. In response, he was able to find out the original engine number, colors, production, and delivery date. After a couple of years of ownership, he commissioned Lenny Copp of West Coast Classics to perform a full rotisserie restoration in 2000. Restored with meticulous attention to detail inside and out, the body was completely stripped down to steel and restored back to its factory specification. By 2002, the restoration was complete, and the bus was driven very sparingly. On September 19, 2010, the bus participated in the annual Concours D' Elegance in Palos Verde. Rare opportunity to purchase a wonderfully restored 21-window in excellent condition that has been always garaged and is a blast to drive.

The Volkswagen “Samba” Deluxe is widely considered one of the most sought-after of all Microbuses of the era. Amongst the most beloved vehicle designs ever created, the VW “bus” transcends history and popular culture, with an iconic style that will bring a smile to nearly everyone that sees one. Microbuses can still be seen parked at California surfing spots, camping grounds, and car shows, as well as in some of the finest car collections around the world. The model's popularity is universal.