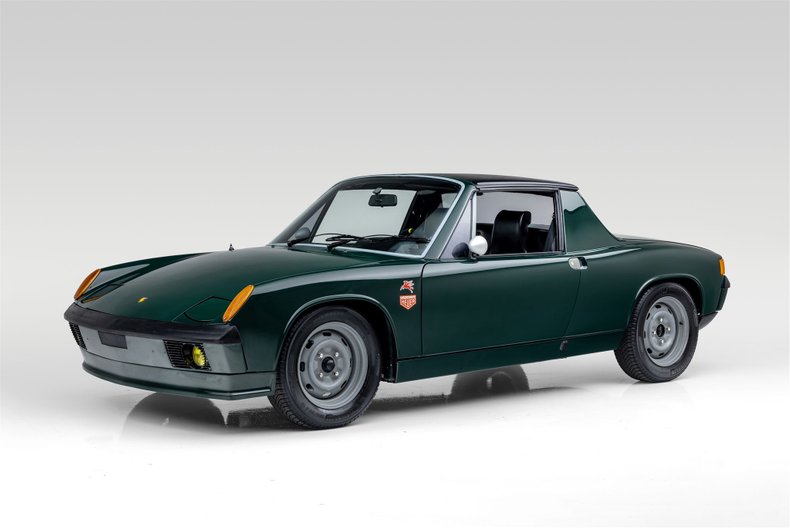 Originally delivered new from the factory as a 914 Limited Edition “Creamsicle” according to the 914 Can-Am Registry. Currently finished in Tropical Green with Black upholstery. The paintwork is in outstanding condition with perfect gaps and panel fit. There are a few rock chips on the front spoiler. The black vinyl upholstery is in excellent condition including the seats, dash, knee guard, and basketweave dash and door panels. The interior also benefits from some tasteful modifications such as the 350mm Momo Model 7 steering wheel, Rennline aluminum pedal assembly, Kenwood Bluetooth audio system and speakers, and VDO instrumentation. Dash-mounted gauges include oil pressure, oil temperature, two-cylinder head temperature gauges (one for each bank), and a voltmeter.

The body is in excellent condition, with no rust. In the early 1990s, the 914 underwent a complete restoration, was media blasted down to the bare metal and finished in Tropical Green. The chassis has adjustable sway bars front and rear as well as adjustable shock absorbers. The rear body structure, rear trailing arms, and control arms have been reinforced. The interior has new carpets and is in superb condition.

Mechanically powered by the reportedly original 2.0-liter engine that was bored and stroked to a displacement of 2.7-liter specification by Timm Pott, who is a respected Porsche engine rebuilder in Ann Arbor, Michigan. According to Timm Pott the engine rebuilder, the engine received new Mahle pistons and cylinders, Carillo rods, a reinforced case, counterbalanced crankshaft, reworked heads with ported intake and exhaust, larger valves by FAT Performance, lightweight flywheel, dual Webber carburetors with ignition provided by a Pertronix distributor, and coil. At the same time, the 901 manual 5-speed transmission was fully disassembled and rebuilt. In December of 2019, maintenance and improvements included an engine-out service with gasket replacements (oil sump, intake & exhaust manifold, muffler, valve covers), new engine heater hose, axle joints & boots (inner & outer), torsion bar end seals, new ignition wires, fuel lines, speedometer cable, shift lever boot, and new rubber roof rests and holders in the rear trunk. The battery was relocated to the front trunk, with a new custom tray, and the shifter was lengthened for an easier gear change. On August 8, 2020, Graham Everett Motorsport LLC performed an engine-out service with new gaskets new valve covers, replace throttle cable, replaced front and rear brake rotors with new brake pads, flushed brake fluid, and bled the brake system. Most recently, on November 2, 2020, Perfection Plus in Little Rock, Arkansas installed new Weber 44 carburetors, and adjust rear brake calipers which totaled $3,665.29. This 914 has a ton of torque in any gear and is very fun to drive. An excellent opportunity to acquire a very well sorted 914 LE that delivers a terrific driving experience and has been well cared for by the previous owners.

Known officially as the 914 Limited Edition, or LE, all 1,000 cars were shipped to North America for sales in the U.S. and Canada. Porsche selected the LE moniker because the SCCA simply asked too much for the rights to license the Can-Am name on the cars, though they agreed in principle to allow it.

Along with the regular Appearance Group option (fog lamps and center console with clock and additional gauges) at $300, the LE package set buyers back another $320. What they got for their money, however, were add-ons to make quite the slick-looking 914: a special interior, alloy wheels, a spoiler below the front bumper, front and rear anti-roll bars, and one of two unique paint combinations, highlighted by a "negative" stripe that spelled out "Porsche" just above the rocker panels.

Porsche imported 500 cars with black as the primary color and 500 in Light Ivory. The black cars all featured Sunflower Yellow rocker panels, bumpers, spoiler, and wheels, earning the car the "Bumblebee" nickname. The white cars were accented in the same places with Phoenix Red, a nearly orange color, giving rise to the "Creamsicle" name.