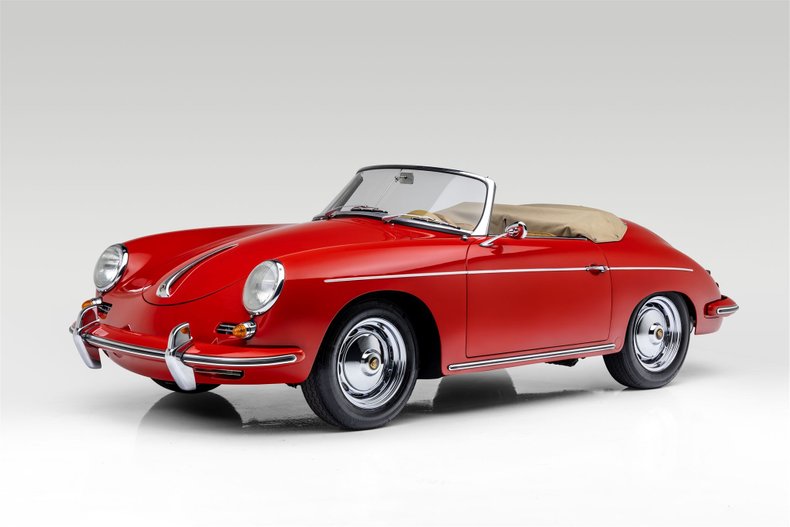 In accordance with the original service booklet, #87809, was first purchased by Mr. Stanzell on June 14, 1960, from Allred Brothers in Glendale, California, and finished in Ivory (6004) with a Red leatherette interior. Optional equipment included reclining seats and Continental tires with a total suggested retail price of $3,696. The current owner purchased the car in 2004 and subsequently commissioned European Collectibles to perform a full engine rebuild on October 4, 2004, which totaled to $8,046.94. Since then, services have largely been performed by NARW Porsche Service in Reseda, California. On October 25, 2018, at 97,785 miles, NARW was commissioned to install 86mm big bore pistons and aluminum cylinders. This included new exhaust valve guides, shorten intake and exhaust valve guides, install valve springs, new seats, and new cylinder head gaskets which totaled to $8,678.52. On January 21, 2019, Custom Classics by Aubrey in Lancaster, California was commissioned to reupholster the front seats and complete a full repaint in Signal Red.

Over the course of ownership the current owner has been able to accrue over 32,388 miles, many of which are attributable to the 1,000 mi events the Roadster has participated in. Eligible for many vintage rallies and has participated in multiple California Mille Miglia, Colorado Grand, Arizona Copperstate, California Classic events, and numerable private rallies with the Petersen Automotive Museum. Never failing to complete any of these 1,000 miles plus events, this Roadster is fully sorted and would make a great addition to any collection!

History
Launched for the 1960 model year based on the redesigned T5 platform, the 356 Roadster was built as the successor to the one-year-only Convertible D model with revised coachwork crafted by Drauz in Heilbronn. From its humble beginnings, Porsche's 356 evolved into the car that established both Porsche and the 356 as industry icons. A class win at Le Mans in 1951 showed its capabilities, but it was legendary New York dealer Max Hoffman who influenced the factory and made it desirable among wealthy American buyers. The 356 B model ran for three years from 1960, featuring styling changes and technical upgrades. Launched at the 1959 Frankfurt Show, the body designated the T6, featured raised headlamps, a re-designed fuel tank for better luggage space, and a larger front boot lid. The interior boasted better instrumentation and more comfortable seats, and the convertible got a better top. It was a sophisticated European sports car capable of a 185 km/h top speed. The model attracted celebrities like Steve McQueen and Janis Joplin.