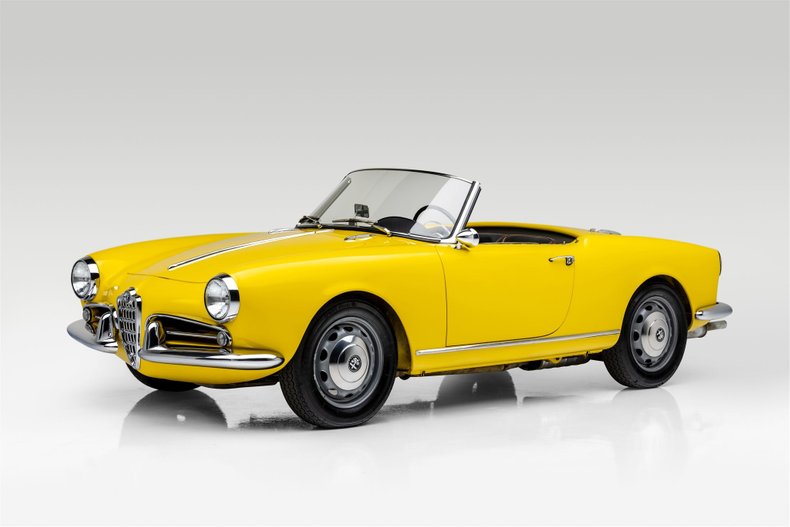 This is the 735th Giulietta Spyder produced with an early chassis number. The current owner acquired this Alfa in 2010 and has enjoyed approximately 25,000 miles, using the vehicle in various vintage rallies including the California Mille Miglia, Colorado Grand, California Classic, plus numerable private rallies with the Petersen Automotive Museum. After purchasing the Spider, a bare metal restoration and interior was completed by Custom Classics by Aubrey in Lancaster, California. In preparation for the repaint, the Pininfarina body was stripped down to bare metal and repainted in Fly Yellow. Since then, services have largely been performed by Santo's Italian Car Service in Northridge, California. Most recently, on November 6, 2020, at 20,325 miles, Santo's Italian Car Service was commissioned to remove and disassemble the differential, repair the trunnion mount, bleed the braking system, and adjust the parking brake.

Mechanically, this Spider benefits from a DOHC 1.9L inline four-cylinder period engine paired to a 5-speed manual transmission and disc brakes. The original numbers matching 1.3L engine is included in the sale along with the original drum brakes. Complete with the spare tire, tool kit, jack, tonneau cover, and 9 years of service history. Fun to drive and easy to maintain, this Alfa Romeo Giulietta Spider presents and drives well, and would be a great addition to any collector's stable.

History
Designed by Pininfarina on a modified Sprint Coupe chassis that had been shortened by five inches, the Alfa Giulietta Spider was the company's second post-war model. The little two-seat Sports Spider was introduced in mid-1955 at the insistence of New York importer Max Hoffman, who saw how well small British and German sports cars were being received in America. The Giulietta Spider offered brisk performance (almost 100 mph) from its free-revving all-alloy 1.3-liter twin-cam four mounted in a steel unibody chassis that weighed less than 1900 lbs at the curb. With the installation of a 1600 cc engine, the Spider became the slightly larger Giulia and remained available in that form until the arrival of the iconic Duetto in 1966.

Over its nine-year production run at San Giorgio Canavese, a little more than 14,000 units of this durable little convertible were delivered. In recent years, Giuliettas, especially the Spiders, are gaining recognition as a good value in the collector's market, and prices have been rising steadily, following the course of that other post-war small-displacement favorite, the Porsche 356. Many have been prepared for vintage racing, where they deliver good performance and predictable handling, often vying against their old sales rival.