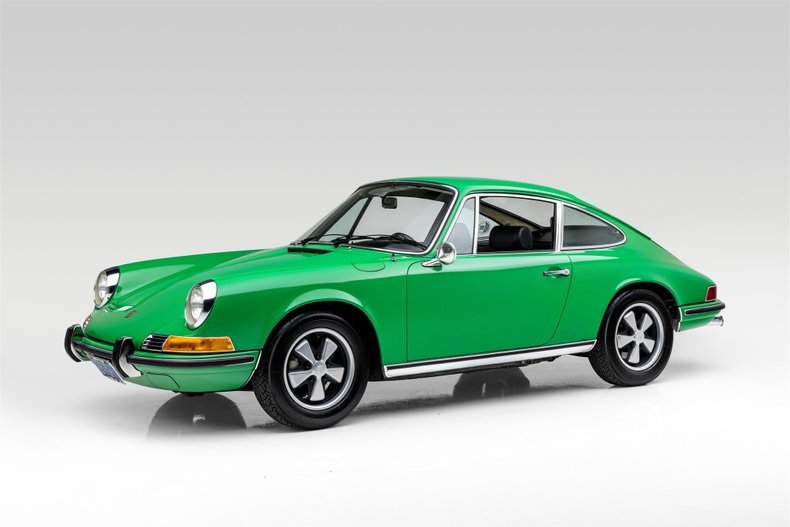 Three (3) owner, preservation class example, with 50,401 original documented miles. Finished in its original color combination of Conda Green with Black leatherette interior. The paintwork is mostly original and is in phenomenal condition with excellent gaps and panel fit. All the exterior trim, badges, and glass are original and in very good condition. As a result of the light usage and excellent care the vehicle received, the upholstery is all original and in pristine condition. The undercarriage is solid, rust-free, and all original. The suspension and exhaust system have been detailed as well.

In 1971, Mr. Ault was attending college at UCLA and was majoring in physics, while his wife, Mrs. Ault, already finished school and was starting her career in the aerospace industry. The couple aspired to one day owning a 911, so she went to the dealership searching for a Crystal Blue 911. When they arrived at the dealership, the only 911 sitting on the showroom floor at the time was a 1971 Porsche 911E Coupe finished in Conda Green with a Black interior. After understanding the limited availability of 911's and as the Conda Green paintwork began to grow on them, they eventually decided to purchase it on November 11, 1971, from Aero Porsche Audi in Inglewood, California.

From that point on, due primarily to work, the 911E was driven very sparingly and mainly only for trips that the couple would take. It was always serviced by Aero Porsche Audi until 1973, by which time it only had accrued 18,000 miles. By 1984, the 911 had reached 41,735 miles and as their focus began to shift into the wine industry, the vehicle was used less and spent the next 30 years in a barn. On January 5, 2014, the couple consigned the vehicle over to Dusty Cars LLC where it was sold to the second owner.

History
1969 brought the first substantive changes to the Porsche 911 lineup, which now consisted of three models: the 911T, 911E and 911S. All of these were available in a Coupe and a Targa body styles. The T was carbureted until 1972, while the E and S were mechanically fuel injected. For 1969, Porsche stretched the wheelbase and flared the wheel arches, allowing wider tires to be fitted. Unlike most performance cars of the era, horsepower kept climbing through the use of fuel injection and a series of 200 cc displacement increases culminating in the 1972 2.4-liter cars.

The T was the base model with the lowest horsepower. It was tractable and quite adequate for street use. The E had a bit more horsepower and more luxury features, while the 200 hp S was the car for weekend racers. Rust continued to be an issue, although by this time Porsche was at least paying more attention to the car's vulnerable floor pans. A mid-year change to Bosch K-Jetronic (CIS) injection for the 1973 ½ 911T produced what many believed to be the sweetest running 911 yet.