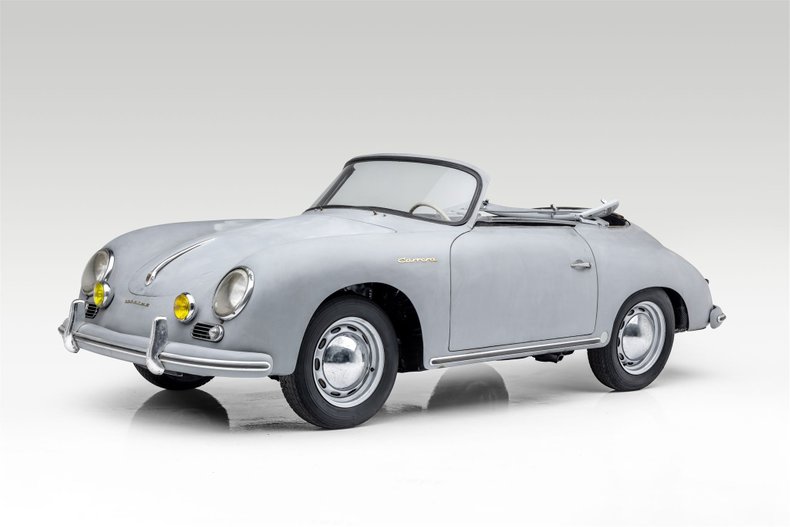 One (1) owner for the past 47 years, originally delivered in Polyantha Red (5602) with Beige (2164) leather upholstery. Factory options included body-mounted fog lights and chrome rims. Very early, beehive taillight example, currently in primer with a partial leather interior. The interior is complete with door panels, seats, VDO Carrera instrumentation, Becker Europa radio, and a soft-top frame. All of the decks and doors are original. This example is not offered with a 4-cam engine, however, we are able to locate a period-correct 4-cam engine at your request. The transmission is a manual 4-speed GS transmission that is period-correct and has a complete set of drum brakes.

This rare and highly collectible Porsche 356A Carrera Cabriolet was delivered new to Nürnberg, Germany through Autohaus Krauß to its first owner, Eberhart Reinshagen. According to the Porsche Kardex on file, this 356 was serviced in Europe until April of 1959. The earliest known history begins with Mr. Salmon, who was a United States Air Force Veteran who served during the Vietnam war. He reportedly purchased the Carrera in the early 1970s and had the vehicle stored in a barn in Levittown, Pennsylvania. After sitting in a barn for nearly five decades, the vehicle arrived at European Collectibles. Coincidentally, it was just in time for our annual Open House event that we host every year. During our event, we had the vehicle on display and encouraged our guests to try and determine the year and model. Out of 65 participants, only 8 were able to correctly discern that this was a genuine 1956 Porsche 356A 1500 GS Carrera Cabriolet. After the show, the entire chassis was disassembled, and all parts were inventoried. The chassis was stripped down to the steel, media blasted, and sealed. All necessary rust repair was performed and documented.

Complete with full photo documentation of the work performed, Porsche Kardex, and spare tire. Eligible for many driving events including the Mille Miglia in Italy, Colorado Grand, California Mille, Copperstate 1000 Road Rally, and many other events. One of only 26 356A Carrera 1500 GS Cabriolet built a very rare Porsche production road car.

History
The evocative 'Carrera' name first graced the flanks of a Porsche in 1955 applied to the Typ 356A, the second version of the German manufacturer's iconic sports car. The work of Ferry Porsche, that first Porsche road car - the 356 - was based on the Volkswagen designed by his father, employing a similar platform-type chassis with rear-mounted air-cooled engine and torsion bar all-independent suspension. Having commenced manufacture with a short run of aluminum-bodied cars built at Gmünd, Porsche began volume production of the steel-bodied 356 coupé at its old base in Stuttgart, at first in premises shared with coachbuilders Reutter and then (from 1955) in its original factory at Zuffenhausen. Only 430 356A Cabriolets were manufactured in 1956, very few of which would have left the factory equipped with the Carrera engine like this example, which is one of only 26 to have the T1 body.