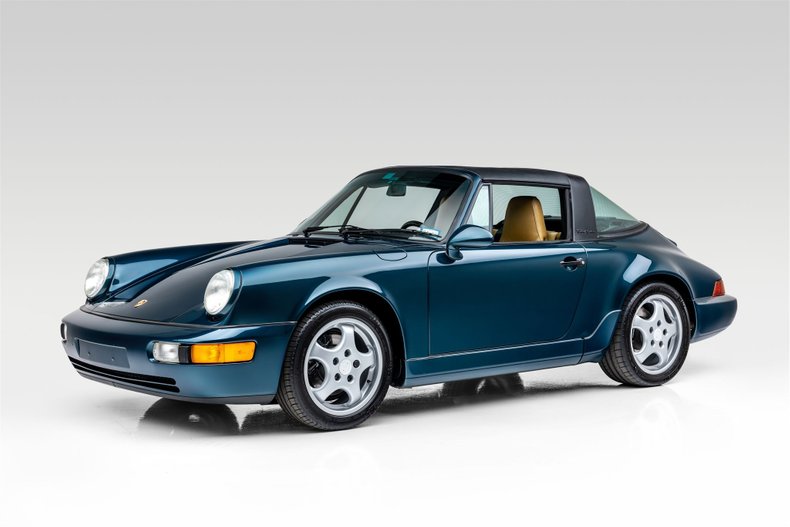 This 964 Targa entered the US through the port of Charleston, South Carolina, and was trucked to Bob Moore Porsche in Oklahoma City, Oklahoma, but was sold new by Momentum Porsche of Houston, for a suggested retail price of $70,986. The 964 was sold new in June of 1992 to the original owner who had it for 25 years. On August 8, 1992, at 45 miles, Momentum Porsche completed the first service, and all subsequent services were recorded in the original warranty booklet until 2016. Although service history from Porsche was supplied to us, we do have a large service receipt from Park Place Porsche in Dallas, Texas, dated March 15, 2017, at 13,401 Miles for $5,766.91, and we put the car through a local specialist for a check-up as well. In 2017, European Collectibles sold this Targa to the current owner who was also located in Houston, Texas, and has enjoyed the car for nearly 2,000 miles over the past 4 years. This car has spent its life in Texas and Southern California as the first owner had residences in both places and the second owner was also from Houston. The Carfax and records on hand confirm regular services in both states and an incredibly low 15,794 original miles.

The condition of this 911 is nothing short of spectacular. The Amazon Green Metallic paintwork is excellent throughout and is a beautiful shade of blue except in certain lights where a green undertone is visible. The interior reflects excellent care with draped leather front and rear seats and the low mileage with all original surfaces that are in beautiful condition including the beige carpets. This car was originally fitted with 16" Porsche Cup 1 wheels, but the size didn't do the car justice, so we purchased an original set of 17" Cup 1s, and installed a set of Michelin Pilot Sport (225/40 17 rear and 205/50 17 front) tires. An upgraded Porsche Classic Communication Management (PCCM) stereo system was also installed.

Mechanically powered by a 3.6L six-cylinder engine (type M64/01) which produces 247 horsepower paired with a manual 5-speed transmission (G50/03). Complete with collapsible spare, Porsche air compressor, tool kit, jack, dealer supplements, drivers' manual, maintenance booklet, and 29 years of service history. This is one of just 211 Carrera Targas built for the US market in the 1992 model year and is complete with books, tools, window sticker, multiple keys, and a documented service history. A very rare opportunity to acquire a well-maintained and documented 964 Targa finished in a desirable color combination.

History
The new 964 version of the Porsche 911 that was launched in 1989 was seen as rather futuristic in its day due to the smooth integration of its body-color bumpers and front bodywork with the body itself; but looking back, the 964 cars now fit neatly in Porsche history, leading up to the 993 models that bid farewell to a long legacy of air-cooled 911s. While the car looked suspiciously like it might be a mere reskin of the 930, 87 percent of the components were new or redesigned, according to Porsche. The flat-six engine was pushed out to 3.6 liters with 250 hp—with strong and steady torque delivery—and this generation was known by enthusiasts as far more dynamically predictable than the 930.

The four-wheel-drive Carrera 4 was the form in which the 964 made its debut in 1989, and it is now mainly selected by connoisseurs in snowy states due to its all-weather tractability. The two-wheel-drive Carrera 2 is often cited as the more engaging version of the 964 cars from a driver's standpoint, as the cars are about 220 pounds lighter and have a bit more front trunk space.