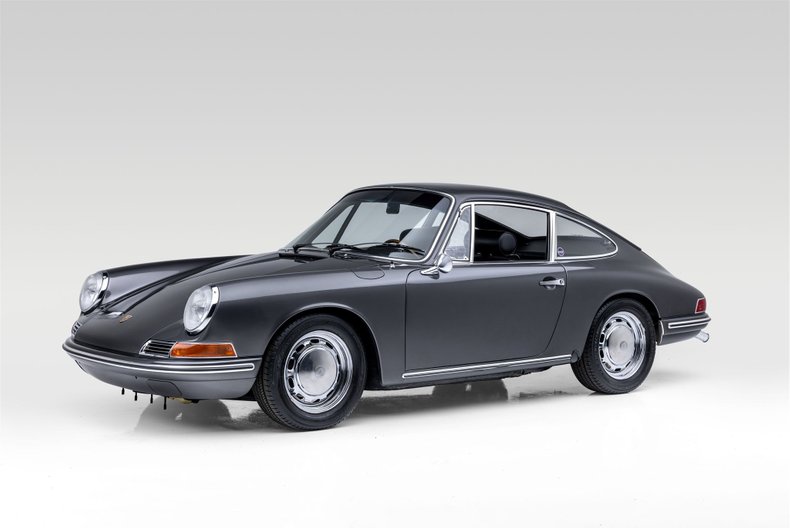 This 912 has been in Southern California for the past decade with excellent gaps and panel fit finished in Slate Grey Metallic over Black leather upholstery. Factory options include a wooden steering wheel, Blaupunkt radio 'Frankfurt', loudspeaker, ventilated chrome wheels, and antenna. The Black leatherette interior was recently upholstered and is a one-year-only for 1968. The brushed aluminum dash is in excellent condition and contrasts with the original wood steering wheel and VDO instrumentation. Yokohama YK740 GTS 195 60 HR15 tires are mounted on date-coded Lemmerz chrome wheels. The undercarriage is solid, featuring original floor pans with no signs of rust.

The earliest known history of this vehicle begins on March 15, 2012, when Mr. Tricklebank purchased this 912 from Auto Exchange in Alamo, California for $6,995.00. Shortly thereafter he commissioned Otto Maddics Motors in Venice, California to complete an engine and transmission overhaul. Following the overhaul, Beach Boys Racing in Venice, California was chosen to complete a bare-metal repaint in Slate Grey Metallic. Throughout six (6) years, in addition to doing some of the work himself, Mr. Tricklebank restored his 912 using reputable shops totaling nearly $40,000.00 in receipts.

On October 30, 2018, the 912 was sold to Mr. Alvarez who kept the 912 for 15-months and only added 1,000-miles. He used it for local weekend Cars & Coffee events and was invited to display it at Luftgekühlt VI at the Universal Studios backlot. Mr. Alvarez took this 912 to the next level with help from TLG Auto in North Hollywood and Scientific Automotive in Pasadena, California.

The past owner acquired the 912 in January of 2020. Most recently, during his 20-months / 1,400 miles of ownership, he took the car to Haydon Bros Porsche Repair in Anaheim, California. Haydon is one of the top air-cooled specialists in the area and has a strong following among enthusiasts. Highlights of services he performed included new front lower ball joints, 4-wheel alignment, oil service, fuel level sender gasket, compression test, set timing, adjust carbs, install stock muffler, and Coco Mats.