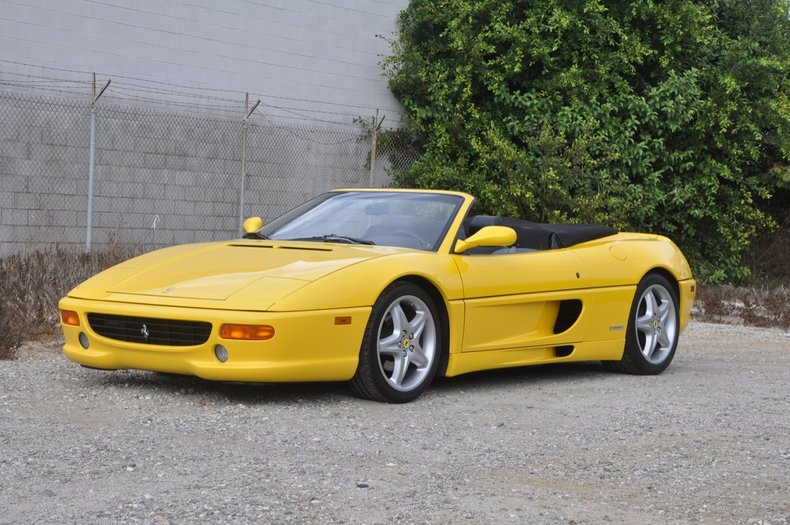 The Ferrari F355 (Type F129) is a sports car built by Ferrari from May 1994 to 1999. It is an evolution of the Ferrari 348 and was replaced by the Ferrari 360. It is a mid-engined, rear wheel drive, V8-powered two-seat coupe, targa, or convertible. Design emphasis for the F355 was placed on significantly improved performance, as well as drivability across a wider range of speeds and in different environments (such as low-speed city traffic.)

Apart from the displacement increase from 3.4 to 3.5 L, the major difference between the V8 engine in the 348 and F355 is the introduction of a 5-valve cylinder head. This new head design allowed for better intake permeability and resulted in an engine that was considerably more powerful, producing 380 PS (279 kW; 375 hp). The longitudinal 90° V8 engine was bored 2mm over the 348's engine (85 mm rather than 83 mm), resulting in the small increase in displacement. Engine internals are produced using lightweight materials; the connecting rods are forged in Ti6-Al-4V titanium alloy. The engine's compression ratio is 11:1 and employs the Bosch Motronic M2.7 engine control unit in the 1995 model year, later changed to the M5.2 in 1996 through end of production. The Motronic system controls the electronic fuel injection and ignition systems, with a single spark plug per cylinder. Engine lubrication is via a dry-sump oiling system.

The frame is a steel monocoque with tubular steel rear sub-frame with front and rear suspensions using independent, unequal-length wishbones, coil springs over gas-filled telescopic shock absorbers with electronic control servos and anti-roll bars. The car allows selection between two damper settings, "Comfort" and "Sport". Ferrari fitted all road-going F355 models with Pirelli tires, size 225/40ZR 18 in front and 265/40 ZR 18 in the rear. Although the F355 was equipped with power-assisted steering (intended to improve low-speed drivability relative to the outgoing 348), this could optionally be replaced with a manual steering rack setup by special order.

Aerodynamic designs for the car included over 1,300 hours of wind tunnel analysis. The car incorporates a Nolder profile on the upper portion of the tail, and a fairing on the underbody that generates downforce when the car is at speed.

The car's standard seats are upholstered with hides from Connolly Leather, and are fitted asymmetrically in the car; this results in the driver being slightly closer to the car's center line than the passenger.

At launch, two models were available: the coupe Berlinetta priced at $130,000 and the targa topped GTS. The Spider (convertible) version, priced at $137,000 was introduced in 1995. In 1997 the Formula One style paddle gear shift electrohydraulic manual transmission was introduced with the Ferrari 355 F1 (note the dropping of the F before the 355) adding $7,000 to the dealer asking price. The F355 was the last in the series of mid-engined Ferraris with the Flying Buttress rear window, a lineage going back to the 1965 Dino 206 GT, unveiled at the Paris Auto Show.

The nomenclature does not follow the formula from the previous decades, i.e., engine capacity (in liters) followed by number of cylinders (e.g. 246 = 2.4 liters, 6 cylinders, 308 = 3.0 liters, 8 cylinders, etc.). For the F355, Ferrari used engine capacity followed by the number of valves per cylinder (355 = 3.5 litres engine capacity and 5 valves per cylinder) to bring the performance advances introduced by a 5 valve per cylinder configuration into the forefront.
Total production of 11,273 units made the F355 the most-produced Ferrari at the time. This sales record would be surpassed by the next generation 360 and later, the F430.

On November 17, 1995 Ralph Lauren picked up this Ferrari 355 Spyder from Miller Motorcars, Inc. The records show a total of four (4) owners, extremely well maintained & serviced. This 355 Spyder is in stunning condition with the pleasure of shifting a 6-speed manual transmission. Come with books, records, work shop manual and jack. There's nothing like the open Ferrari driving experience. This 355 Spyder represents a rare value in the market place.