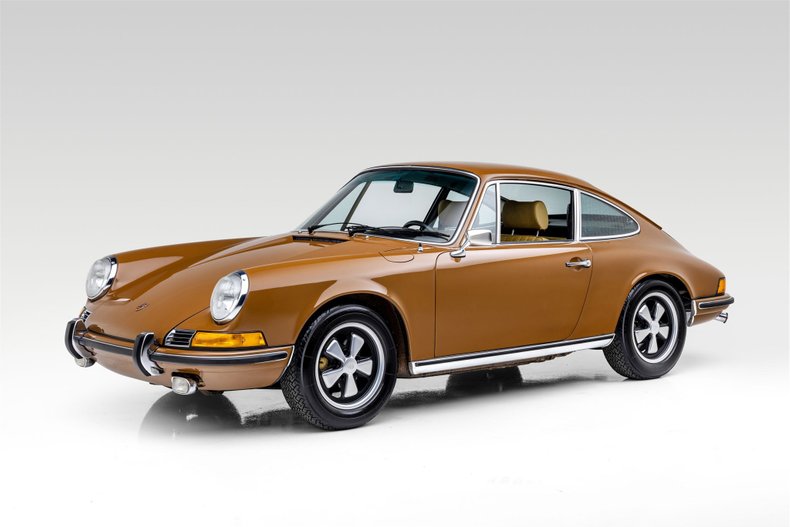 Single-family ownership for the past 42 years finished in its factory color combination of Sepia Brown (415) with Beige leatherette upholstery. The Sepia Brown paintwork is in exceptional condition with excellent fit and finish. Aluminum trim and brightwork are in remarkable condition with factory tinted glass. The interior is in beautiful condition and is original with a perfect dash, door pockets, front seats, carpets, deluxe butterfly horn ring, and VDO instrumentation. The headlights have been upgraded to European H4s with 128 Hella fog lights. The flat Fuchs alloy wheels have been refinished and new 185/70 VR15 Pirelli Cinturato CN36 have been installed. The undercarriage is all original with the factory undercoat and no indications of damage or rust.

Mechanically, the matching 2.4-liter engine with the Mechanical Fuel Injection is producing 130HP. A complete engine-out service/tune was performed recently and this 911 runs excellent with a smooth-shifting 4-speed manual transmission that has been recently rebuilt. The four-wheel disc braking system has been serviced and a safety inspection was performed. Complete with a jack, owner's manual, and spare. A very rare opportunity to acquire a very honest, one-year-only external oil-fill, 911T in this condition.

In 1972, a tremendous effort was made to improve the handling of the 911. Due to the 911's unusual engine placement (rear-mounted, with most of the vehicle's weight concentrated over the rear axle), early 911's were prone to oversteer when driven at the limit and could easily spin in the hands of an inexperienced driver. To remedy this, Porsche relocated the oil tank from its position behind the right rear wheel to in front of it. This had the effect of moving the weight of almost 8.5 L (9 US quarts) of oil from outside the wheelbase to inside, improving weight distribution and thus, handling. To facilitate filling of the oil tank, Porsche installed an oil filler door (much like the fuel filler door on the left front fender) on the right rear quarter panel. Unfortunately, this unique design was scrapped after only one year, some say because inattentive gas station attendants were putting gas in the oil tank. The oil tank was subsequently relocated to its original position for the model year 1973 and remained there until it was relocated within the wheelbase for the 964 models.